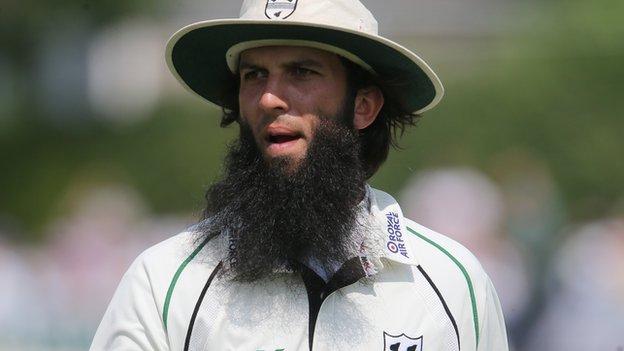 Moeen Ali hit an impressive third County Championship century of the summer to help Worcestershire bat for most of the first day against Division Two leaders Lancashire at New Road.

Moeen's liking for the Red Rose

The England Lions batsman, a regular thorn in Lancashire's side in recent seasons, made 104 out of his team's all-out total of 287.

The visitors then negotiated one Alan Richardson over to close on 0-0.

Earlier, Moeen, who passed 1,000 Championship runs for Worcestershire in a summer for only the second time, was well supported by decent contributions from young batsmen Tom Fell (43) and Matt Pardoe (35).

But, after looking well set on 215-3, Fell's run-out triggered a final session collapse of seven wickets for just 72 runs.

"Lancashire once again showed their promotion credentials by taking seven wickets in the final session to restrict the home side to a total below 300.

"Some smart thinking from wicketkeeper Gareth Cross saw Samaraweera stumped off the bowling of Kyle Hogg, who took four of the last five wickets to fall.

"After Tom Fell was ran out by Luis Reece, the home side collapsed and, on a pitch that looks decent, the Red Rose will fancy posting a first innings lead."