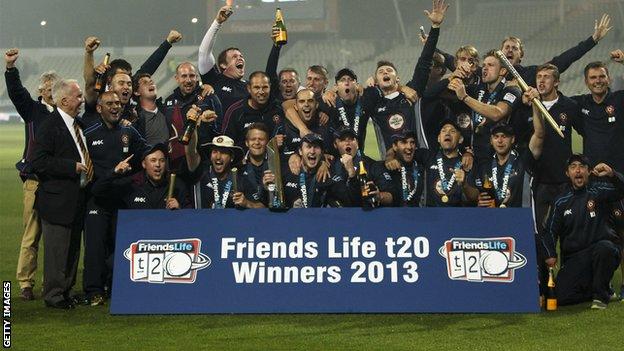 Northants ended a 21-year wait for a one-day trophy when they clinched the FLt20 title at finals day on Saturday.

It completed a remarkable turnaround for a side that finished the 2012 season having won only five of 38 matches in all competitions.

"We went back to the drawing board because we were just absolutely sick of losing," limited-overs captain Alex Wakely told BBC Radio Northampton.

"To win a trophy is definitely the proudest moment of my career."

After finishing second bottom of the table in both four-day and 40-over cricket, and bottom in T20 cricket, the new FLt20 champions are also second in County Championship Division Two.

The response from Northants' hierarchy to a catastrophic 2012 was change.

The club named Northants legend David Ripley as outgoing coach David Capel's replacement, and in turn he appointed Stephen Peters as club captain. However, faith was kept with 24-year-old Wakely as leader of the limited-overs side.

"There were a few changes in staff and playing personnel but the core of the squad have been here for three years. What was more important was a huge change in attitude," Wakely continued.

"Since the new regime really kicked in last November, David Ripley and the backroom staff have done a sensational job."

Former wicketkeeper Ripley spent his entire playing career at Wantage Road, amassing more than 10,000 runs and claiming over 1,000 victims in a 17-year spell that ended with his retirement in 2001.

He was immediately installed as head of the club's academy and second string, even keeping wicket for the back-up XI as recently as 2011.

"You can't praise chief executive David Smith and head coach David Ripley highly enough. The changes at the top have overhauled their approach to the game - with dramatic results that will have surprised even them.

"They've recruited wisely and will now hope that - with extra investment - they can retain the players they've helped develop and continue to improve on success beyond the expectations of even the most die-hard supporter."

"It is a surprise that we have transformed things so quickly," said Ripley.

"The target for this season was promotion in the Championship, we certainly weren't targeting a one-day trophy this soon.

"A key moment for me this year was early on. We lost our first two one-day games and I remember in a meeting that [Northants seamer] Trent Copeland was very vocal about how visible the lack of belief amongst the squad was.

"From there we managed some tight wins, got momentum and became difficult to stop."

The Northants side that was crowned FLt20 champions, the county's first limited-overs success since winning the 1992 Natwest Trophy, included Wakely, David Willey, Ben Duckett and David Murphy - all players brought through the county's ranks.

Willey has been tipped for an England call-up after his match-winning performance against Surrey, which included a hat-trick to finish the game.

"I hope David Willey will want to stay, he is very grounded," Ripley continued.

"Of course we want to keep the entire squad together but I realise that the salary cap is £2m and we're only spending half that.

"We're not going to be able to sign Hashim Amla for the last six games of the season like Surrey, or bring in Ricky Ponting and Graeme Smith, but I really hope we can keep our home-grown players.

"The feeling amongst the players and their families in the dressing room on Saturday was something special.

"I think it's normal that you'd have the boys celebrating together but having wives and children there I think sums up what we've built this success on - enjoying each other's company and making sure we have happy players.

"I think all the Northants players are a bit in shock. We were tired just watching so goodness knows how they felt. It'll sink in but it will be overwhelming for them.

"David Willey has got that X-Factor as a player. With the ball in the hand, something happens. I've seen him for few years now and that's been coming."

"But I know that if these players fall out of our wage structure then they will leave and we will wish them well."

Limited-overs skipper Wakely was one and hopes this year's performances will be a springboard for further success.

"I am Northants through and through and when I signed my new contract I was desperate to win a trophy - no one ever gives you a chance at a small club like this," Wakely added.

"At counties with bigger budgets and regular success, it just doesn't mean as much to them. It has never been about individual performances and I think the fact we're so tight-knit is a big reason for why we have had this success.

"Hopefully this is just the start for us."