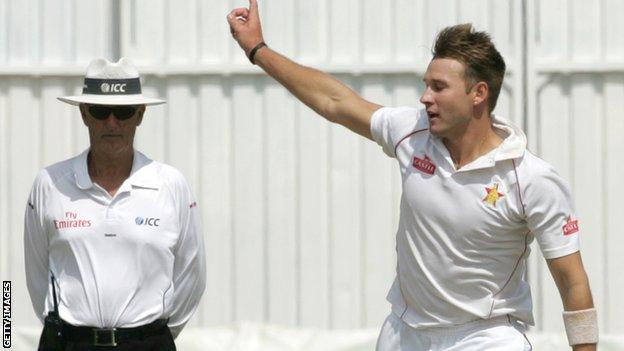 Lancashire have confirmed the signing of Zimbabwe pace bowler Kyle Jarvis on a three-year contract.

The 24-year-old, who has appeared in eight Tests and 24 one-day games for Zimbabwe, has said his long-term ambition is to qualify for England.

"Playing county cricket has been an ambition of mine for a number of years," Jarvis told the club website.

"My future is with Lancashire, with an end goal of potentially becoming English-qualified in the future."

Jarvis, who has 30 Test wickets and has twice taken five in an innings against West Indies and New Zealand, has sacrificed his place in the Zimbabwe national team to join Lancashire.

He continued: "I have loved my time playing for Zimbabwe. I am extremely grateful for the part they have played in my development, but I feel the time is right to take on a new challenge and a new career.

"Reaching this decision has been an incredibly difficult process, but I intend to make a home for myself in Manchester and hope my stay at Lancashire far outlasts this initial contract."

The Red Rose county say Jarvis will join them as a non-overseas player, subject to registration, and will link up with them "in the near future".