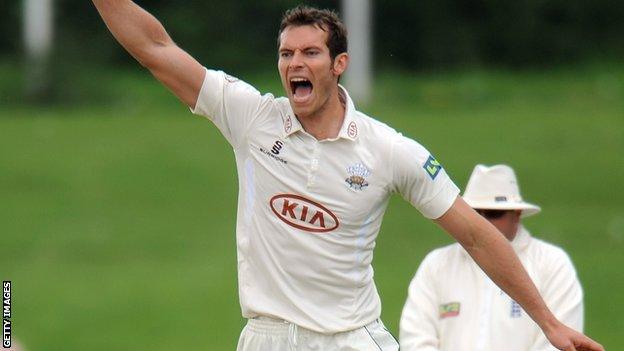 Pace bowler Chris Tremlett says he is "dying" to play for England in the fifth Ashes Test against Australia.

The 31-year-old, who has not featured in a Test since January 2012, looks likely to replace the injured Tim Bresnan on his home ground of The Oval.

"I'm very hopeful. It's been a long time coming and it's been great to be back involved," said Tremlett.

Where it all began

"The Oval is indelibly linked with the Ashes and can justifiably claim to be the birthplace of the great Anglo-Australian sporting rivalry. After Australia's seven-run victory there in 1882, a mock obituary appeared in the Sporting Times, mourning the death of English cricket and noting that: "The body will be cremated and the ashes taken to Australia."

Read more in our guide to The Oval

"I've had my injuries over the last couple of years and I'm dying to get an opportunity to play."

The former Hampshire man established himself as a Test regular on the tour of Australia in 2010-11, taking 17 wickets as England triumphed down under for the first time in 24 years.

However, a bulging disc in his back has prevented Tremlett from adding to his 11 caps, the last of which was won against Pakistan in Dubai more than 18 months ago.

"It's great to be back at The Oval. Unfortunately Tim Bresnan has got injured and hopefully it's myself who can get the opportunity."

With a 3-0 lead ahead of the final Test, England have already wrapped up a third consecutive Ashes triumph.

Victory in the match that begins on Wednesday would see England win four Tests in a home Ashes series for the first time, while a draw would see Alastair Cook's men climb above India to second in the world rankings.

"Obviously the guys would be delighted to win 4-0, but we won't look too far ahead of ourselves," said Tremlett, who has taken 19 wickets in seven County Championship matches for Surrey this season.

"When it comes down to Wednesday morning we'll be thinking about the first ball, whether it's with the ball or the bat."

As England travel to Australia this winter, they will begin their defence of the urn less than three months after the conclusion of the final Test.

But Australia wicketkeeper Brad Haddin says the result at The Oval will carry no significance when his side begin their attempt to regain the Ashes in Brisbane on 21 November.

"I don't think it'll make much difference to what happens in the home series," said the 35-year-old.

"England have played better over this series but I don't think momentum will make much of a difference. We'd just like to get a win, we've played good enough cricket on this tour to deserve a win in a Test match."

Vice-captain Haddin said that he expects Shane Watson to be fit after the all-rounder suffered a groin injury during England's 74-run win in the fourth Test at Chester-le-Street.

But pace bowler Pat Cummins, who is not part of the Australia touring party, has suffered a recurrence of a back problem and is likely to miss most of the 2013-14 season down under.