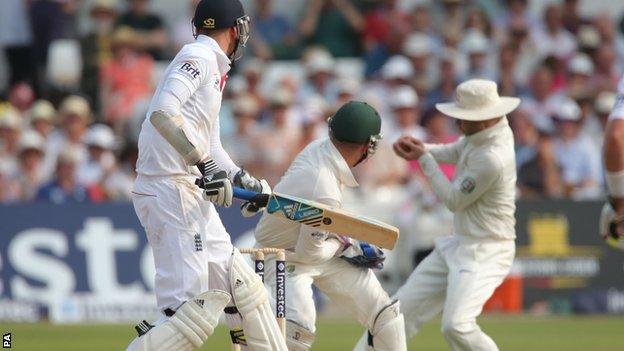 England bowler Stuart Broad has defended his decision not to walk during England's narrow win in the first Ashes Test against Australia.

Broad was widely criticised for refusing to walk after edging Ashton Agar to slip via Brad Haddin's gloves.

The 27-year-old says the noise of the ball flicking the Australia wicketkeeper's gloves caused confusion.

"It wasn't as clear-cut as everyone had thought, although I knew I'd hit it," said Broad.

Australia were unable to review umpire Aleem Dar's not-out decision after failing with two reviews during the second innings.

Broad, on 37 at the time, added 28 to his score as England secured victory by only 14 runs at Trent Bridge.

"For players on the field not to have known if I nicked it proves there was confusion," added the Nottinghamshire bowler.

"It was an odd one. There was no particular noise because of the noise of Haddin's gloves.

"I went down to the other end and Ian Bell said, 'what happened there? I didn't hear anything'.

"There is no debate, it's quite simple. The Australians I have played with and have watched, with the exception of Adam Gilchrist, believe in standing and it's up to the umpire to give you out - there shouldn't be a moral argument."

"Agar came up to me and asked if I'd nicked it because he wasn't sure.

"Walking's an interesting one. You have a split second and sometimes when you edge it you walk out of pure frustration. You kick yourself and walk away."

Broad took 11 wickets in the 74-run victory in the fourth Test at Chester-le-Street as England took a 3-0 lead in the five-match series.

Ahead of the fifth Test at The Oval, which starts on Wednesday, Broad says England have developed a ruthless streak.

"We've been accused of all sorts, but those things aren't remembered - it's winning the series that will be remembered," he said.

"We do have a win-at-all-costs mentality. I think we're quite an unpleasant team to play against at the moment.

"Teams won't play against us and enjoy the experience. That's what we want."