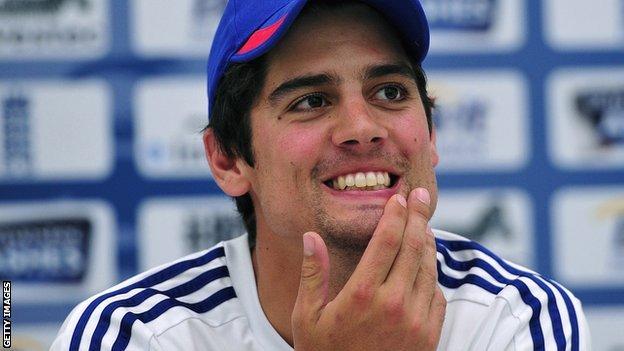 Alastair Cook says it will be an "an amazing moment" to lift the Ashes urn as a victorious England captain.

England go into the final Test, which starts on Wednesday, eyeing a 4-0 win after retaining the Ashes with a draw at Old Trafford, before clinching the series with victory in the fourth Test.

"When you come to the Oval, you walk past pictures of Michael Vaughan and Andrew Strauss doing it," he said.

"Knowing I will be the next captain to do it brings a smile to the face."

The 28-year-old added: "In an absolutely ideal world, you want to do it with a victory, of course you would, but if we did lose the game, we wouldn't be that deflated because we would have achieved what we wanted to achieve."

Cook suggested England are unlikely to make any unenforced changes to the side which recorded a 74-run win at Chester-le-Street last time out.

"We're picking the side with the best chance of winning the game," he said.

Tim Bresnan is injured, with Steven Finn, Chris Tremlett and Chris Woakes in contention to replace the Yorkshire bowler.

Cook has also backed leading bowler James Anderson, who has taken only four wickets in the past two Tests at an expensive average of 72.75, to come good again.

"He'll be desperate to lead the attack as he has done for a number of years."

Essex opener Cook added that the chance to become the first England team to win a home Ashes series 4-0 will be their chief motivation at the Oval.

"We've got the opportunity to do what no England side has done before, that's our goal," Cook said.

"Every time you beat Australia is a good feeling."

England have never won four Tests in a home Ashes series and are seeking to match their biggest margin of victory - 5-1 in Australia in 1978-79.

The weather forecast is set fair for the first three days of the match, with the possibility of showers over the weekend. All five days are sold out.