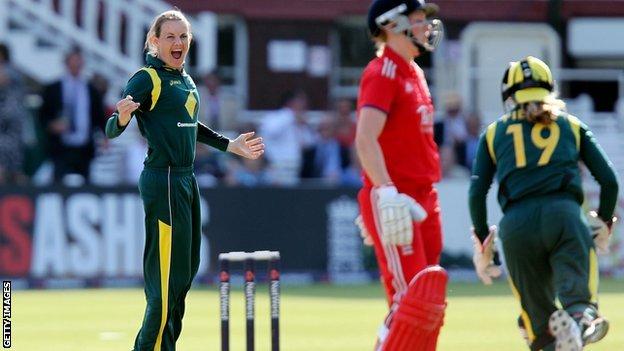 Australia beat England by 27 runs in the first one-day international to take the lead in the women's Ashes series.

Chasing 204, England were given a strong start by Charlotte Edwards (61), but when she fell the hosts lost seven wickets for 34 to slip to 176 all out.

After the drawn Test match, the ODI win gives Australia a 4-2 lead, with two points on offer in each of the remaining two ODIs and three Twenty20s.

The result also means the Southern Stars need to win only two from the remaining five limited-overs contests in order to retain the Ashes.

Their success was largely down to the work of spin pair Jess Jonassen (4-38) and Erin Osborne (3-39), who ran through the England top order.

But England will also look to the failings of their own batters, particularly after the fall of skipper Edwards, caught by wicketkeeper Jodie Fields off Osborne.

Heather Knight's 25 was the hosts' second highest score, while seven of their line-up failed to reach double figures, not helped by the run outs of Laura Marsh and Jenny Gunn.

Lanning's 64-ball effort had earlier been supported by 32 from Fields and 24 from Ellyse Perry.

England pace bowler Katherine Brunt (3-29) and off-spinner Marsh (2-27) were economical, but Gunn, Anya Shrubsole and Holly Colvin went for a combined 141 from their 30 overs.

Gunn's 1-53, did however, take her to 103 career wickets, past Clare Taylor as England's most successful ODI bowler.

"We need to step up and take responsibility," said Marsh. "There were some good contributions at the top of the order but I think we can all hold our hands up and say we can do much better than that.

"We would back ourselves to chase that total and everyone is very disappointed.

"We will assess what went wrong but we will also take the positives, we bowled really well and we'll be looking to move on to Hove and perform much better there on Friday."