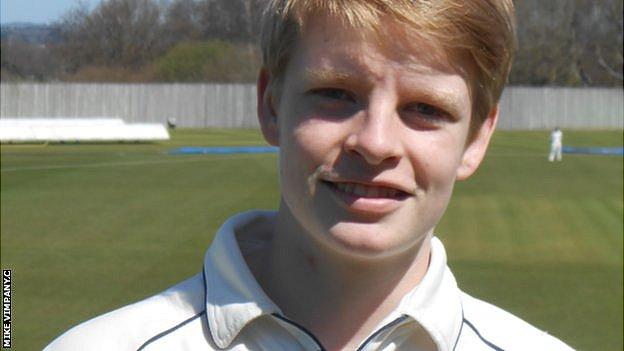 Brad Taylor has admitted he was almost overcome by nerves after becoming the youngest Hampshire player to appear in the first team since 1867.

"I thought I would crumble under pressure," he told BBC Radio Solent.

"While fielding I didn't want the ball to come to me I was that nervous. It shouldn't be like that."

Taylor, who picks up his GCSE results on Thursday, was given his chance because regular spinner Danny Briggs was on duty with the England Lions team.

Hampshire lost the game by five runs but remain top of their group and on course for a place in the semi-finals as they look to retain the trophy they won at Lord's last summer.

And despite the result, Taylor afterwards admitted he loved every minute of his debut.

"I want more now. I just want to play cricket," he said.

"It's always good to have a first experience of competitive cricket and to get out two good batsman.

"It was a flat track, against good batsman so it was a good test of my skills and to finish with 2-50, I'm very happy with that at the end of the game."

And on taking the wicket of Katich, he continued: "I didn't expect to bowl a Test player out at the start of the day, so it's a big boost.

"It's more nerve wracking playing than watching on TV, especially when it gets tight at the end."

Taylor also had Lancashire opener Stephen Moore caught behind from his third ball of the game, breaking a 146-year-old record as the youngest player to take a wicket for the county in a competitive match.

"That's awesome, I didn't realise. I've really worked hard for this and I think I've taken my chance," he said.

Taylor did not expect his county debut to come around so quickly.

"It's all gone so quick, it's good," he added. "I always wanted to happen but I did not think it would this year."