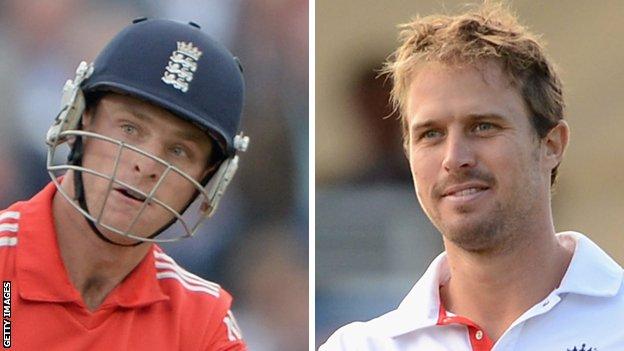 The Bears are understood to have put in a formal 28-day period of notice to sign the pair, who are both out of contract at the end of this summer.

Compton, 30, has made 572 County Championship runs in seven matches since being discarded by England's Test team for this summer's Ashes series.

South Africa-born Compton, grandson of former England legend Denis, started his career with Middlesex before moving to Taunton in 2010.

He is playing in the current Championship game between Warwickshire and Somerset at Edgbaston, while Buttler has been on England Lions duty this week, playing alongside Bears fast bowler Boyd Rankin against Bangladesh A at Bristol.

Warwickshire suffer more than most counties because of international calls.

Apart from Test regulars Ian Bell and Jonathan Trott, this week they have also lost Chris Woakes, who is making his Test debut against Australia at The Oval.

With former Bears coach Ashley Giles, who is now in charge of England's one-day team, continuing to have a big say on the selection panel, Warwickshire have also had Rankin, Chris Wright and Varun Chopra called up this summer for England Lions duty.

Following his Test debut against the Aussies, the England and Wales Cricket Board have now rewarded all-rounder Woakes with an increment contract for 2012-13.

Non-contracted players can earn an England increment contract via a points system.

Five points are awarded for a Test appearance and two for a T20 or ODI appearance, with an increment contract being awarded automatically once the player reaches 20 points during the 12-month contract period.

"This award reflects the contribution Chris has made this year in all formats of the game for England," said ECB national selector Geoff Miller. "We congratulate him on his achievement."