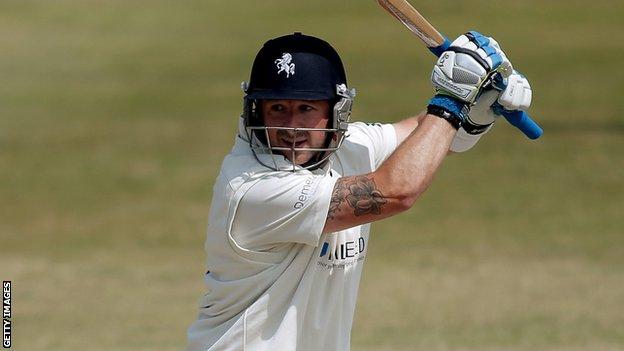 "It was a bit scratchy at the start, but I finally got some rhythm and I knew we had to get a move on so we had a bit of fun out there"

After Kent resumed on 334-6, Stevens, who is under investigation for failing to report an illegal approach, soon added the two needed for his century.

He departed for 126, but James Tredwell made 48 and Callum Haggett a career-best 44 as Kent totalled 460 all out.

Michael Klinger and Chris Dent then led the visitors safely to stumps on 80-0.

"Despite the loss of 34 overs to the weather this was an entertaining day's cricket.

"Darren Stevens duly got his century and Kent's tail wagged significantly to reach a score that gives them half a chance at bowling out Gloucestershire out twice.

"But Gloucestershire survived to close of play without loss and, if Kent are to achieve their aim, they must hope that Haggett shines as brightly with the ball as he did with the bat."

"Gloucestershire will be pleased that their opening pair survived what could have been a tricky session, with the ball swinging in clammy conditions.

"Their first port of call will be the 324 needed to avoid the follow-on.

"If they succeed in doing that, I wouldn't be surprised if the captains met to set up a final day result in a match that both sides need to win if they are to keep in contention for a promotion spot."