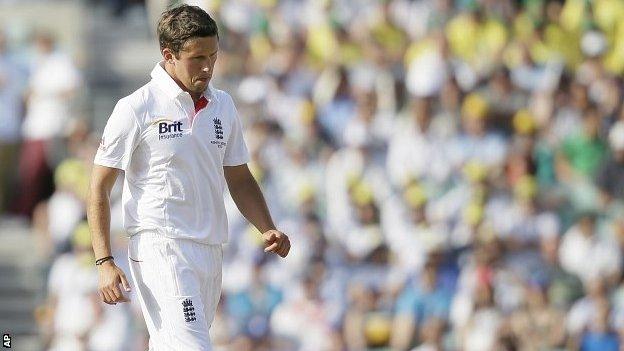 Simon Kerrigan's former coach says the Lancashire left-arm spin bowler has the character to bounce back from his nightmare England debut at The Oval.

Kerrigan appeared to be overcome by nerves as he conceded 53 runs in eight overs on day one of the fifth Test.

But Lance Hall, who coached Kerrigan at Fulwood and Broughton Cricket Club between 2001 and 2007, says the 24-year-old can still prosper for England.

"He has such self-belief I know he will come back from it," he told BBC Sport.

"He just has to get back on the horse. He's always had self-confidence and will back himself to the hilt.

"People at Lancashire will tell you how if things aren't going well at one end, he'll say 'Get me on at the other end'."

"Simon Kerrigan was not talked about as playing for England until Monty Panesar had his problems. They've gone and thrust him in, but he's bowling in the second division of the Championship this season. That doesn't cut it in international cricket. Look at his performance for the Lions last week, he didn't pull up any trees. The selectors have got this one wrong."

Kerrigan, who had not previously represented England in any form of international cricket, was handed a surprise call-up in a five-man attack after taking 47 wickets at an average of 20.23 for Lancashire this season.

But he never recovered from a brutal early assault from Shane Watson as his first two overs went for 28 runs.

Watson went on to make 176 as Australia racked up 307-4 on the opening day of the Test before rain delayed the start of day two.

"Everybody has bad days in their career - it's just unfortunate that his bad day came at the start, but that is the game we play," added Hall, who described Kerrigan's debut as the proudest day of his life after the birth of his son.

"A close friend, who was our first-team captain, spoke to him last night and he said apparently it just wasn't coming out right.

"But he's not a nervous individual and never has been. I met him when he was 12 and he was always in your face, to the point of being a pain in the backside. He was very forthright in his views."

Kerrigan started out as a seamer but switched to spin at the age of 13 because England and Wales Cricket Board bowling directives would only allow under-aged players to bowl four over spells of seam in senior cricket.

After striking with his second ball as a spinner, he was the club's leading wicket-taker when they won the Palace Shield in 2005 and was soon drafted in to Lancashire's academy.

He made his debut for the county in 2010 and took a vital 9-51 against Hampshire in the penultimate game of their 2011 County Championship-winning season.

Since becoming their first-choice spinner when Gary Keedy moved to Surrey in 2012, Kerrigan has taken 91 wickets in 25 Championship games.

"He is a fighter and a very fine bowler," said Hall. "He'll bounce back, without a shadow of a doubt."