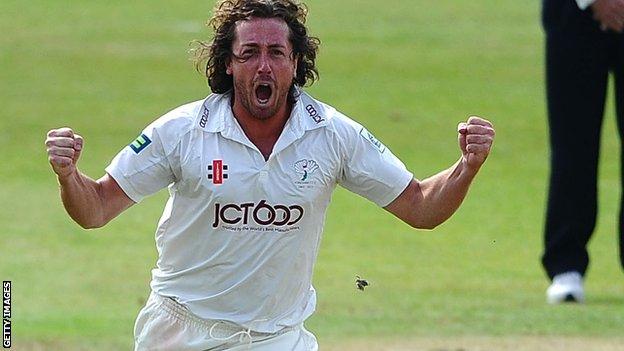 Resuming on 118-4 in their second innings, still 289 runs behind, Notts lost David Hussey (24) to the fifth ball of the third day at Trent Bridge.

The hosts were all out for 266 after lunch, Chris Read (58) the only man to compile a half century.

The 25-year-old struck three fours in Luke Fletcher's first over to take the Tykes beyond the victory target, extending their lead at the top of Division One to 33 points over second-placed Middlesex.

Yorkshire had looked well set for victory after Sidebottom and Steven Patterson shared nine wickets to dismiss Notts for 150 in the first innings, before they then slipped to 118-4 following on.

Sidebottom (3-38) had Australian Hussey caught behind in the first over of the day, before Jack Brooks dismissed Riki Wessels (22) and Ajmal Shahzad (19) fell to Rashid (3-22).

Read hit seven fours in his 110-ball 58, but once he was caught by wicketkeeper Jonny Bairstow off the bowling of Sidebottom, it was left to Rashid to dismiss the last two batsmen and set up the win for Yorkshire.