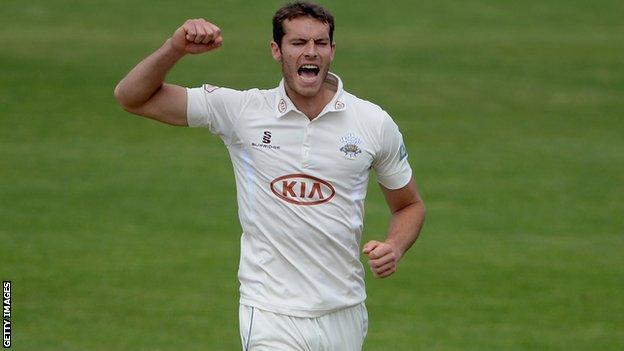 Chris Tremlett took 8-96 but Durham made 421 before reducing Surrey to 97-6 when bad light stopped play early.

The hosts resumed on 309-5 and Tremlett soon claimed Jamie Harrison before Jade Dernbach bowled Paul Collingwood to end hopes of him taking all 10 wickets.

In reply, Surrey were soon three down and it was 36-4 when Hashim Amla fell.

A double-wicket maiden from Usman Arshad dismissed Zander de Bruyn and Gary Wilson just before tea and play did not resume as the clouds gathered.

Surrey look certain to remain rooted to the foot of Division One despite Chris Tremlett achieving career-best figures that may have offered some kind of reminder to the England selectors.

Having taken all five wickets to fall on the first day, he then had nightwatchman Harrison caught at slip.

Shortly after, umpire Mark Benson left the field having received a call regarding a family emergency. He was replaced by local league umpire Philip Raine, who stood at square leg while Michael Gough officiated at both ends, with ECB reserve list umpire Paul Baldwin arriving in mid-afternoon.

Both Surrey openers were out with the total on five, Harrison striking first when Rory Burns pushed forward and edged to Mustard.

Michael Richardson then held a good catch to his right at third slip to get rid of Arun Harinath off Rushworth, and it became 20-3 when Vikram Solanki offered no stroke and was lbw to Harrison.

After Amla's exit, de Bruyn and Steven Davies added 47 before Arshad's double strike left Davies unbeaten on 36 at the close.

"Bad light robbed Durham of the chance to force Surrey to follow on after their young pace attack ripped through their top and middle order to leave them on 97-6 after 27 overs.

"Durham's 421 was a record County Championship score against Surrey and only the second time they had reached at least four batting points at home in the last two years.

"But Surrey then struggled to cope with the pace of Jamie Harrison, Mark Wood, Chris Rushworth and debutant Usman Arshad.

"Hopefully the weather won't ruin this as a spectacle on day three."

"A tough day for Surrey in the face of some excellent bowling from Durham. After the hosts were all out for 421, with Chris Tremlett taking career-best figures of 8-96, Surrey collapsed to 36-4. Jamie Harrison, Chris Rushworth and Mark Wood got the ball to move around and Wood took the big wicket of Hashim Amla for 14.

"Steven Davies and Zander de Bruyn took Surrey onto 83 but debutant Usman Arshad then dismissed De Bruyn for 21 and Gary Wilson without scoring.

"The whole of the final session was lost to bad light and Surrey will resume on the third morning 97-6 and with an awful lot of work to do."