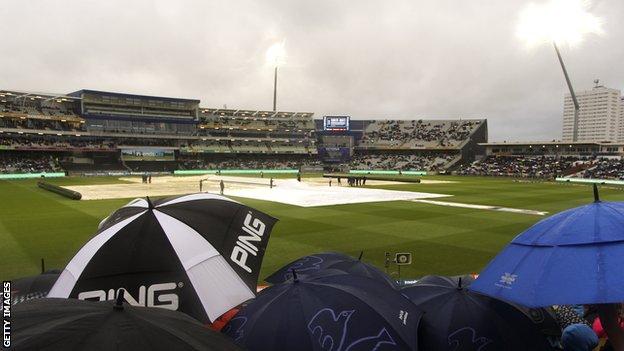 Warwickshire had to settle for a draw against Somerset after poor weather forced the players off with the Bears 66 runs short of their target.

But rain and bad light at Edgbaston brought about a premature end to the match with 18 overs still to play.

Earlier, Jeetan Patel took 5-67 as Somerset slipped to 255 all out, Nick Compton top-scoring with 91.

The visitors had been in a relatively comfortable position at the start of the day, resuming on 133-2 with the in-form Compton and nightwatchman George Dockrell at the crease.

But after the former was dismissed by Keith Barker (3-71), Somerset lost regular wickets and, even with Alex Barrow's patient 39, they looked to be heading for a fifth defeat of the County Championship season.

Westwood and Chopra got the Warwickshire chase off to a flier and, although three wickets for nine runs slowed their progress, they were strong favourites for victory before the weather intervened.