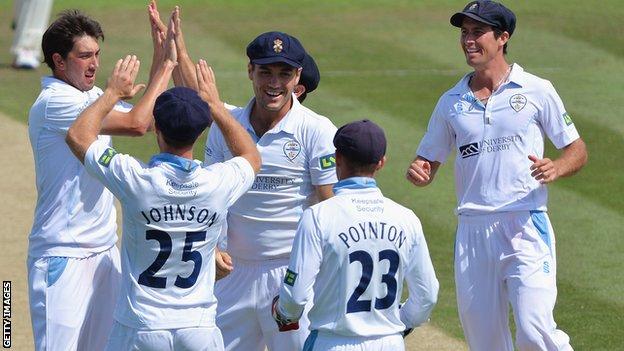 Derbyshire beat Middlesex by 56 runs to move above Somerset and out of the Championship Division One drop zone.

Middlesex began the day 26-2, requiring another 271 runs for victory.

They were soon reduced to 121-7, with Sam Robson (29) and Adam Voges (48) the only batsmen to reach double figures, before tailenders Gareth Berg and Ollie Rayner threatened an unlikely victory.

After losing seven and drawing three of their first 10 matches in the 2013 County Championship, Derbyshire were rooted to the bottom of Division One. But back-to-back wins over Surrey and Middlesex have now given them a fighting chance.

The defeat, coupled with Yorkshire's crushing win over Nottinghamshire, leaves Middlesex's title hopes in tatters as they must now overhaul the Tykes' 33-point lead with just four games remaining.

The visitors' overnight pair of Robson and Voges began the day steadily until the former was clean bowled by Tim Groenewald in the 13th over of the morning.

It was 101-6, when Peter Burgoyne snared the prize wicket of Voges thanks to a low slip catch by Chesney Hughes and a Derbyshire victory seemed inevitable.

But after John Simpson scooped Burgoyne to cover just before lunch, Berg and Rayner showed real appetite for a scrap and added 85 in 24 overs to take the required runs into double figures.

However, Matt Higginbottom removed Berg and although Rayner battled on, Footitt (4-65) and Burgoyne (3-66) took a wicket apiece to seal victory and move Derbyshire two points clear of second-bottom Somerset.