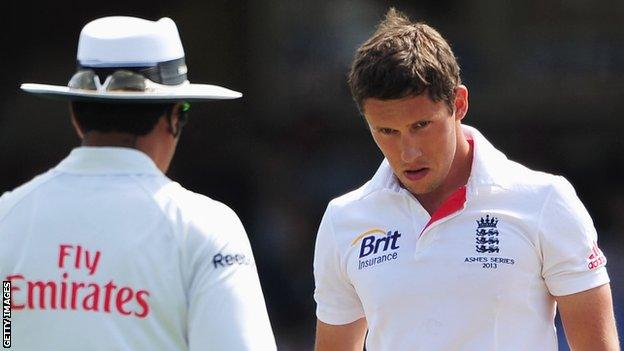 The Preston-born spinner conceded 53 runs in eight overs on day one of the fifth Test and did not feature on the second day as Australia reached 492-9.

Kerrigan, 24, has taken 47 Championship wickets for Lancashire this summer.

"Simon Kerrigan was not talked about as playing for England until Monty Panesar had his problems. They've gone and thrust him in, but he's bowling in the second division of the Championship this season. That doesn't cut it in international cricket. Look at his performance for the Lions last week, he didn't pull up any trees. The selectors have got this one wrong."

"He would have liked to have bowled better but some of the comments that have come out are just way off the mark," said Chapple.

"All that has happened is he's had one bad spell. Some of the comments have been ill-founded. They've no idea about the player himself."

England bowling coach David Saker has defended the selection of Kerrigan and fellow debutant Chris Woakes as they shared just one wicket between them in Australia's first innings.

Kerrigan, who had not previously represented England in any form of international cricket, was handed a surprise call-up in a five-man attack after taking 47 wickets at an average of 20.23 for Lancashire this season.

He went for 28 runs in his first two overs and appeared to be struck by nerves at The Oval.

"Shane Warne himself said after two or three Tests that his average was in the 300's or something and I remember watching him bowl and he didn't land it in his first few Tests," Chapple told BBC Radio Lancashire.

"At the end of the day he [Kerrigan] is still a tremendous prospect and he should be allowed to feel as comfortable as possible."