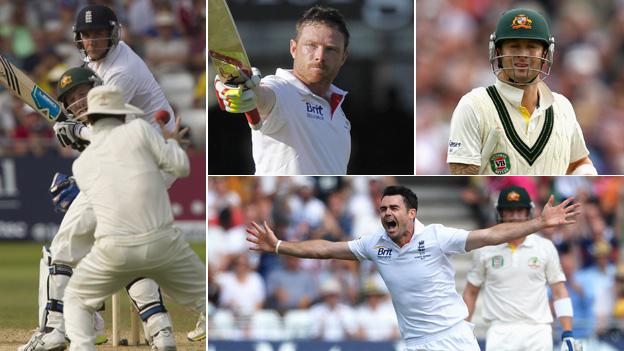 One of the subtle beauties of Test cricket is the way a five-day match can hinge on a split-second.

England's 3-0 Ashes victory over Australia featured several instances where dropped catches, umpiring errors or twists of fate altered the course of the match and, ultimately, the destination of the urn.

Here, we relive 10 pivotal moments from the 2013 Ashes summer, with reactions from the BBC Test Match Special team at the time.

Use the comments section at the bottom of the story to add suggestions of your own.

What happened: Australia batsman David Warner arrived in England with a reputation for explosive batting, but it was his explosive temper that thrust him into the headlines even before the series had started.

After failing with the bat in a morale-sapping Champions Trophy defeat by England in June, Warner infamously let out his frustrations by punching England batsman Joe Root in a Birmingham bar.

What they said:"David Warner is a loose cannon for Australia, but he is still a potential match-winner. Warner's pride will be hurting after this latest off-field incident - and so it should be. I hope he thinks he let his team-mates down." - Test Match Special commentator Jim Maxwell.

Why it mattered: The off-field incident betrayed the unrest in the Australian camp that subsequently cost coach Mickey Arthur his job. Warner was fined, banned and sent to play for their second string in Zimbabwe and South Africa, weakening Australia's batting line-up for the first two Tests.

What happened: The opening Ashes Test at Trent Bridge was hanging in the balance when, late on day three, an edge from England all-rounder Stuart Broad brushed Australia wicketkeeper Brad Haddin's gloves and was caught by Michael Clarke at slip. When umpire Aleem Dar astonished almost everyone watching by declining to give the batsman out, Broad remained poker-faced and stood his ground.

What they said: "These sorts of things can scar a player for years to come and change their reputations within the game. Broad's body language afterwards told you all you needed to know - head bowed, shoulders slumped. He knew he had done the wrong thing." - BBC cricket correspondent Jonathan Agnew.

"The rules say that it's 'in the opinion of the umpire' so it's above things like 'The Spirit of the Game'. I don't see bowlers asking you back when the ball is sliding down leg." - Former England batsman & Test Match Special summariser Geoffrey Boycott

Why it mattered: If Broad had been dismissed, England would have been seven wickets down in their second innings, with a lead of just 232. Following the reprieve, Broad took his score from 37 to 65 to help England extend their advantage by a further 78 runs. Australia, despite a heroic last-wicket partnership, lost by 14 runs.

What happened: Amid unbearable tension on the final day at Trent Bridge, Australia's final pair of Brad Haddin and James Pattinson took the tourists to the brink of victory with a partnership of 65. But when Haddin was caught behind off Anderson for 71 via a slight inside edge - confirmed by the faintest of Hot Spot marks on his bat - England could celebrate one of the closest wins in Ashes history.

What they said: "Jimmy looks emotionally drained. He has a 10-for in the match and is the go-to man for Alastair Cook. It was the thinnest of edges, what a climax to the Test." - Former England spinner Phil Tufnell.

Why it mattered: England's relief was palpable after clinging on by such a narrow margin to go 1-0 up in the series. Meanwhile, a deflated Australia failed to rouse themselves for the second Test at Lord's and were hammered.

What happened: Australia were going along well at 50-1 in reply to England's 361 when Chris Rogers took a swipe at a Graeme Swann full toss, missed, and was given out lbw. Conscious that Shane Watson had already used up one of his team's referrals, Rogers chose not to review but was left to regret the decision when Hawk-Eye suggested the ball was missing leg stump by some distance.

What they said: "I've never seen anything like that in my life. It started out at eye level and never looked like pitching. Even Swann is not celebrating that one, he knows it was a terrible delivery. Chris Rogers will be absolutely mortified." - Phil Tufnell.

Why it mattered: Rogers's comical dismissal was the catalyst for a disastrous implosion, as Australia were bundled out for 128 on their way to a heavy defeat.

What happened: With a first-innings deficit of 233, Australia needed early wickets to stand any chance of getting back into contention at Lord's. Sure enough, Alastair Cook, Jonathan Trott and Kevin Pietersen all fell cheaply to leave the hosts teetering on 30-3. But the picture could have been rosier for Australia had an edge from Joe Root not sailed inexplicably between wicketkeeper Brad Haddin and Michael Clarke at first slip.

What they said: "People talk about luck in sport. Joe Root certainly had that but the fact he ended the day with a fine century to his name, batting England into an impregnable position, was because he grabbed his opportunity with both hands and made the absolute maximum he could from it. It rather sums Root up. He looks angelic, but he is as hard as nails and as competitive as anyone in the side." - Jonathan Agnew

Why it mattered: Root, on eight at the time of his let-off, went on to make a masterful 180 to take the match out of Australia's reach as England won by 347 runs to take a 2-0 lead in the series.

What happened: Australia's first-innings 527-7 declared put them in control of the third Test at Old Trafford, and when England slipped to 110-4 in reply, the tourists sensed an opportunity. Kevin Pietersen's hundred was crucial to England's subsequent recovery but things could have taken a different course had he been given out lbw to Shane Watson for 62. Australia opted against a review, only for replays to show that umpire Tony Hill's decision would have been overturned.

What they said: "If Australia had reviewed it, Pietersen would have been walking back to the pavilion now. Michael Clarke just saw one of the backroom staff show the finger to suggest it was out." - England's 2005 Ashes-winning captain Michael Vaughan.

Why it mattered: Pietersen's 113 and some aggressive batting from Stuart Broad on the fourth morning helped England avoid the follow-on. The time Australia lost by batting again proved pivotal when heavy rain on the final day washed out their chances of victory.

What happened: Despite forecasts of apocalyptic weather, the final day at Old Trafford got under way only 30 minutes late and England - battling to save the game on a misbehaving pitch - were soon in deep trouble at 27-3. There were plenty more near misses as the hosts eked out a further 10 runs before the rain finally arrived at 2pm to take the players off the field.

Why it mattered: Three hours after the interruption, with no sign of a break in the weather, the captains shook hands on a draw and the Ashes had been retained in 14 days.

What they said: "It was a slightly anti-climactic way for England to retain the Ashes but if you are an England fan you won't be too worried about that - it is a long time since their side wrapped up a series against Australia so quickly." - Jonathan Agnew.

8. Durham - Bell strides out to save England

What happened: After conceding a first-innings deficit of 32 runs in the fourth Test in Chester-le-Street, England's top order folded to leave them 49-3 in their second innings and in danger of collapse. Not for the first time in the series, Ian Bell had other ideas. Piercing the gaps in the field and timing the ball impeccably, Bell compiled his third century of the series, his 113 taking England to 330 all out.

What they said: "It was a special innings by Bell. He has such a rounded game - he looks gorgeous when he's playing his shots and there's hardly any shot he can't play. It's been a pleasure to watch him." - Former England opening batsman Geoffrey Boycott.

Why it mattered: Bell's composed knock and some useful lower-order runs from Tim Bresnan and Graeme Swann set Australia an imposing 299 for victory. Although the tourists briefly threatened an unlikely triumph, an inspired spell from Stuart Broad catapulted England to a 74-run win.

Ian Bell out for 113 - commentary on Test Match Special

What happened: Australia's pursuit of 299 for victory in Durham was gathering pace, with David Warner motoring towards a counter-attacking hundred. At 168-2, England captain Alastair Cook threw the old ball to Tim Bresnan and his decision was instantly rewarded. With a ball that swung late away from the left-hander, Bresnan found the edge of Warner's bat to dismiss him for 71 and send England into raptures.

What they said: "What a wicket that is for England - what a ball by Tim Bresnan. It came out of nowhere. It just bounced and took the outside edge. With two new batsman at the crease, it could shift the momentum." - Former Australia batsman Damien Martyn

Why it mattered: After Bresnan opened the door, Broad smashed it off its hinges. Bowling as quickly and aggressively as at any time in his career, he produced a devastating burst of 6-20 in 45 balls to win the match and seal victory in the series.

Listen to the wicket described on Test Match Special

What happened: With England needing 21 runs from the last four overs to pull off a thrilling win, umpires Aleem Dar and Kumar Dharmasena took the players off for bad light - in accordance with the International Cricket Council's playing regulations. Once the light had faded to the same level it was when they had stopped play on Thursday evening, they were obliged to halt play.

Why it mattered: It signalled the end of the game and prevented England - who were in the box seat for victory, with 21 needed from 24 balls and five wickets still standing - from turning a 3-0 series win into a 4-0 thumping. England and Wales Cricket Board chairman Giles Clarke told Test Match Special it was "totally unsatisfactory" and said he hoped ICC chief executive David Richardson would change the rules at the next ICC board meeting.