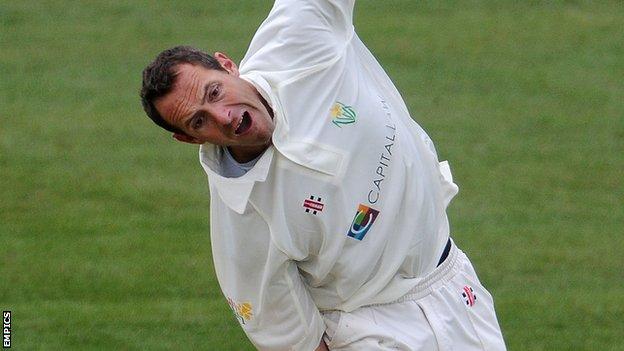 Dean Cosker took 4-88 as Glamorgan beat Leicestershire by an innings and 37 runs to register only their second Championship win of the summer.

The spinner picked up his first three victims as the visitors quickly slumped from their overnight 134-2 to 178-6.

Ned Eckersley was among Cosker's victims, caught by Ben Wright for 76.

Josh Cobb (46 not out) and Alex Wyatt (28) added 50 for the last wicket, but they were eventually all out for 268 as Wyatt was caught off Graham Wagg.

The win was Glamorgan's first in the Championship since beating Worcestershire by 10 wickets in April, and lifted them to fifth in the Division Two table, while Leicestershire's defeat was their fifth of the summer and left them rooted to the bottom

Any hopes of making Glamorgan have to bat again faded when they lost three wickets, including Eckersley, for three runs in the space of four overs.

Cosker achieved his fourth success of the day when he bowled Ollie Freckingham, but he was denied the chance of taking five in an innings for the 10th time in his long career when Wyatt edged Wagg to Michael Hogan at slip, while Andrew Salter ended an impressive debut with 3-66.