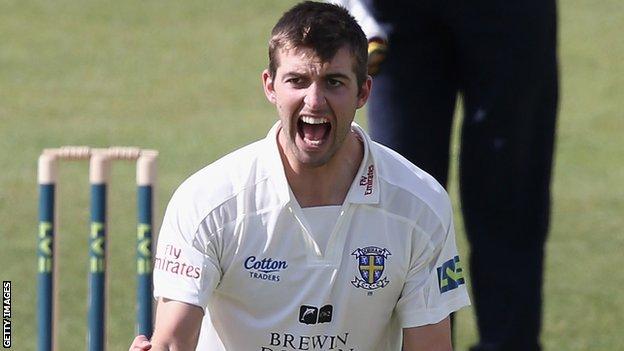 Seam bowler Mark Wood took 5-44 as Durham thrashed Surrey by an innings and 144 runs to move up to second in the Championship Division One table.

The 23-year-old produced the best figures of his career as Surrey were all out for 169 on the final afternoon.

But only one other batsman passed 20 and their last six wickets went down for 32 runs in just nine overs.

It was another dispiriting batting performance by the visitors, who were dismissed for 109 by an inexperienced Durham attack in their first innings and asked to follow on.

They have yet to win this summer and unless the team can raise their game very soon, relegation to Division Two looks a certainty.

Durham, meanwhile, closed the gap on leaders Yorkshire to 25.5 points, with the two sides set to meet at Scarborough in their next match.

Surrey resumed on 52-3 and Amla and Zander de Bruyn extended their partnership to 68 before De Bruyn became Wood's first victim of the day, caught low at slip by Michael Richardson.

The rot really set in, however, after Amla edged to the keeper shotrly before lunch and Wood dismissed Steven Davies (26), Gareth Batty and Gary Wilson in the space of four deliveries - all of them taken by keeper Phil Mustard, who had six catches in the innings.

Jamie Harrison, who took 5-31 in Surrey's first innings, then removed Chris Tremlett before Wood finished things off with the wicket of Tim Linley, who miscued an attempted pull and was caught.

"For a team with so many young bowlers in it, to win like this, makes us very proud.

"We are delighted to beat Surrey twice in a season. They are regarded as a big club and to beat a club which throws a lot of money around like them on big players is a hell of an achievement.

"I think the game with Yorkshire is a title-decider now. I think if we beat Yorkshire in our next match we can win the league.

"We showed a lot of grit and determination throughout the whole team and it is a great feeling to win a game like this."

"We were outplayed in all three skills by a very good Durham team.

"We plan well, we prepare well, we just haven't as a team been able to execute for long enough.

"We have some fighters in that dressing room and they certainly proved that last year.

"I know they are hurting massively from this game, but we need to move on pretty quickly and put ourselves in the mental position where we are fighting on day one."