The final day of the final Ashes Test started at 11:30 BST following heavy overnight rain at The Oval. 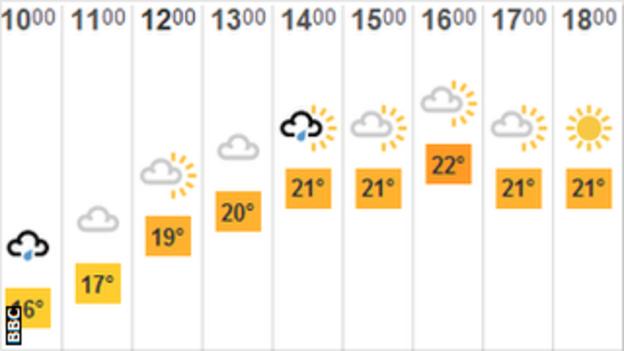 There was no play on day four and the start on Sunday was delayed because of a damp outfield.

But the umpires decided play could begin only half an hour after the scheduled start and a total of 98 overs could be bowled in the day.

BBC Weather's Nick Miller said: "The last of the overnight rain has finally cleared and brighter skies will soon be spreading over London.

"There is a chance of a further afternoon shower but the rest of the day is looking mainly dry with some warm sunny spells developing. If only we could add another day to the Test because tomorrow looks lovely."

Alastair Cook's England team will be presented with the Ashes urn for the third successive time - following victories in 2009 and 2010-11 - once play finishes on day five at The Oval.

The two teams then contest a two-match Twenty20 series, starting at Southampton on Thursday, before five one-day internationals round off Australia's tour.