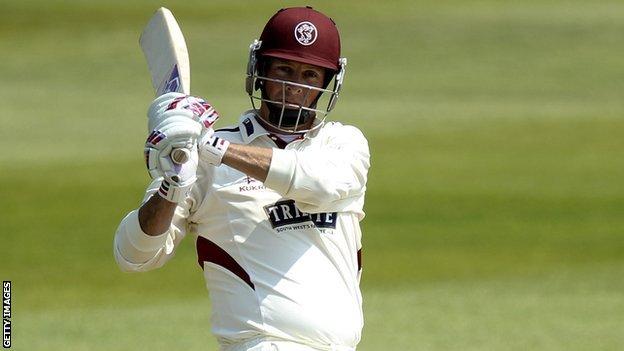 Solid batting saw Somerset reach 332-8 on day one against Division One title-chasers Middlesex at Lord's.

Marcus Trescothick (64) and Chris Jones (58) made half centuries before Somerset lost four wickets for just 33 runs either side of tea.

Alex Barrow (65) and Piyush Chawla (58 not out) then put on an impressive eighth-wicket stand of 107.

There was plenty at stake for both sides, with Middlesex needing to close a 33-point gap on leaders Yorkshire, who they play at Headingley in their final game of the season.

They also have the chance to climb above second-placed Durham, who have a game in hand.

Somerset, by contrast, have only won one game this summer and are facing a struggle to preserve their Division One status for next season.

They were relieved to see Chawla survive being dropped on 15 by second slip Ollie Rayner to hit two sixes on his way to an unbeaten half-century.

"Having won the toss, Somerset reached 101-1 at lunch after the Middlesex seamers toiled on a slow track. But the occasional bowling of county captain Neil Dexter saw the hosts dominate the afternoon session, the medium pacer forcing a mini-collapse that left the visitors 211-7 just after tea.

"However, for the second week running, Middlesex were hit by their opponents' wagging tail as a century stand for the eighth wicket helped Somerset recover to the verge of an unlikely fourth batting point.

"There are plenty of runs to be had for batsmen on this track and, even though it was a cavalier approach from Chawla, the Middlesex top order must try to grind down the Somerset bowlers if they're to gain a first-innings advantage on a used track that is likely to offer a great deal of spin."

"Somerset won the first and third sessions, but Middlesex's six wickets in the afternoon session may prove pivotal.

"Alex Barrow and Piyush Chawla showed good sense and no little skill in salvaging a respectable score from the wreckage of the middle order.

"Middlesex bowled with commendable discipline on a good batting wicket."