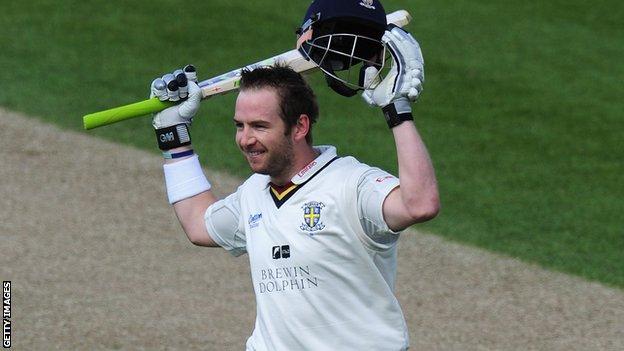 Centuries by Mark Stoneman and Ben Stokes gave Durham the upper hand on day one of their top-of-the-table clash with Yorkshire at Scarborough.

Ryan Sidebottom took two wickets in the space of three balls to give leaders Yorkshire the perfect start.

However, Stoneman added 128 for the fourth wicket with Stokes before becoming Sidebottom's 600th first-class victim, caught behind for 122.

Yorkshire began with a 25.5-point lead over their opponents, who have a game in hand, but they were unable to capitalise on the dismissal of Keaton Jennings and Scott Borthwick for ducks in former England seamer Sidebottom's second over.

Stoneman repeated the form he showed in making 109 against them at Chester-le-Street in April, reaching his hundred off 117 balls - including a six and 23 fours - and it was a relief to the home side when he played at a wide ball from Sidebottom and was caught behind.

His departure had little impact on Stokes, who had an escape on 92 when Adam Lyth failed to hold a difficult chance at slip.

He reached three figures for the first time this summer off 136 balls with a straight-driven four - the 14th of his innings.

Having struck a six off Rashid's leg-spin, he perished when he tried to repeat the shot and top-edged to keeper Jonny Bairstow later in the same over.

But Durham skipper Paul Collingwood (74 not out) and Phil Mustard (42) dominated the day's closing overs and they claimed a fifth batting bonus point just before stumps.