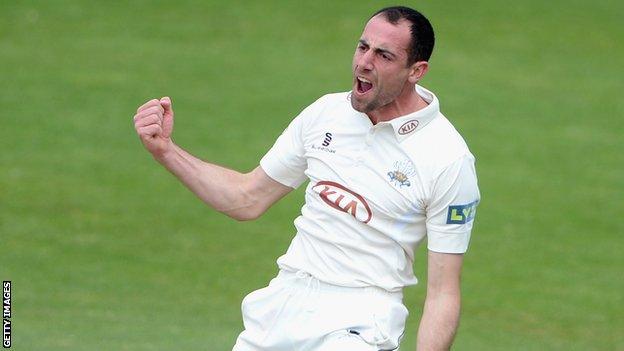 Seamers Tim Linley (4-59) and George Edwards (3-29) gave Surrey the upper hand as they bowled out Derbyshire for 219 at The Oval.

Ben Slater fell in the first over and Edwards, playing his first Championship match in 15 months, had three victims as the visitors were reduced to 109-4.

It ended a positive first day for the home side in what is a key Division One relegation clash - Surrey are currently rooted to the foot of the table, with Derbyshire third-bottom, 15 points better off.

England paceman Chris Tremlett gave Surrey the perfect start, tempting Slater to play at a back-of-a-length delivery and Gareth Batty barely had to move to catch him at first slip.

Will Madsen was next to depart before Paul Borrington (32) and Chanderpaul failed to build on solid starts.

Richard Johnson was back in the hutch when he was bowled by Linley and only Tom Poynton (37) provided any notable resistance thereafter, but Linley returned to the attack and had him caught behind before taking a wicket in each of his next two overs to end the innings.

"Surrey will be happy with their opening day's work as they look to push themselves out of the relegation fight.

"Derbyshire won the toss and decided to bat but George Edwards bowled with pace and hostility, thoroughly deserving his three wickets before Tim Linley's control and accuracy finished their innings.

"It is another big day for both sides tomorrow and the Derbyshire bowlers will look to put the Surrey batsmen under pressure early."

"Derbyshire would have hoped for more from the first day having won the toss and elected to bat on a pitch that looked as though it might turn from the first ball.

"Wickets fell at regular intervals as only Paul Borrington, Shivnarine Chanderpaul and Tom Poynton made much headway against a tight Surrey attack for whom Tim Linley and George Edwards starred.

"Derbyshire lead by 211, but they will have to bowl extremely well and hope the pitch continues to deteriorate as they seek a way back into this match on the second day."