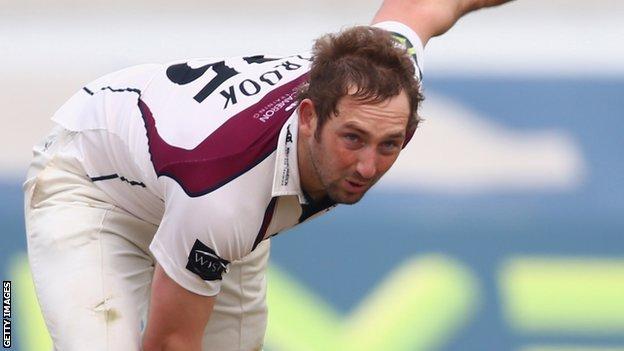 Steven Crook led the way with 4-66 as Division Two game promotion chasers Northants bowled out Glamorgan for 241 on day one at Wantage Road.

It was a disappointing effort by the visitors, who lost their last eight wickets for 99 after reaching 142-2.

Murray Goodwin top-scored with 47 before David Willey (3-54) removed him and Mark Wallace with successive balls.

All-rounder Crook's efforts took his season's tally to 38 wickets before Northants closed in reply on 85-0.

Glamorgan went into the game full of confidence after a resounding innings victory over Leicestershire in their previous Championship game, and back-to-back wins in the YB40 to progress to the semi-finals.

Chris Cooke (21) was unlucky when he hit his own wicket as he shaped to play a ball from Crook into the leg-side.

But the other four members of the top five all passed 30 without anyone playing a major innings - Will Bragg (32) failing to make the most of a life on 28 when he was dropped by Alex Wakely at square leg.

Northants, in second place and looking to widen a 31-point advantage over Essex in third, claimed maximum bowling points.

That was aided by five catches for wicketkeeper David Murphy before openers Stephen Peters (39) and James Middlebrook (38) added 85 in 21 overs to make a healthy start.

"A fascinating day's play on a good cricket wicket finished with Northants on top.

"They had three slices of luck during the Glamorgan innings to end the day with their heads clearly in front.

"Chris Cooke hit his wicket and then David Willey got wickets with successive deliveries, when he had both Murray Goodwin and Mark Wallace strangled down the leg side."