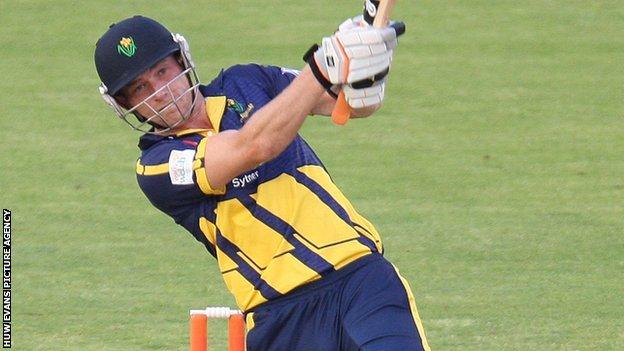 Glamorgan claimed a place in the semi-finals of the Yorkshire Bank 40 with a four-wicket win over Yorkshire.

Yorkshire won the toss at Headingley and opted to bat but lost Jonathan Tattersall and Alex Lees quickly.

But Daniel Hodgson's 90, aided by Kane Williamson and Adam Lyth helped the home side to 215-5 from their 40 overs.

Glamorgan also started with a wobble but Chris Cooke (84) and Jim Allenby (40) got them on track, before Graham Wagg's 31 off 17 balls saw them home.

Somerset's 13-run win over Gloucestershire means they qualify top of Group C - with Nottinghamshire and Hampshire the other group winners - but Glamorgan go through as the best runners-up, pipping Northamptonshire on run rate.

Glamorgan will be away to Hants at the Ageas Bowl in the semi-finals on 7 September but the Welsh county will scarcely care, having agonisingly just missed out on a place in the Friends Life Twenty20 knock-out stages and endured a lacklustre County Championship campaign.

Captained by Richard Pyrah in the absence of Andrew Gale, who was rested, Yorkshire's young side gave a good account of themselves but Glamorgan's batsmen always had a 216 target well within their sights.

They were in some trouble when openers Gareth Rees and Mark Wallace soon departed to the new-ball pairing of Iain Wardlaw and Moin Ashraf.

But Cooke led the revival with a brisk 84 from 78 balls with six fours and two sixes before he holed out to Oliver Robinson, who took a spectacular catch on the midwicket boundary.

Allenby, Marcus North and Murray Goodwin all made useful contributions but it was the firepower of Wagg that proved decisive in the end.

With 31 wanted from four overs he tore into Pyrah, lashing him for three sixes in four balls.

Ashraf claimed him as his third victim - Wagg's 31 including a four and four sixes - but by then Glamorgan were only six short of the finishing line.