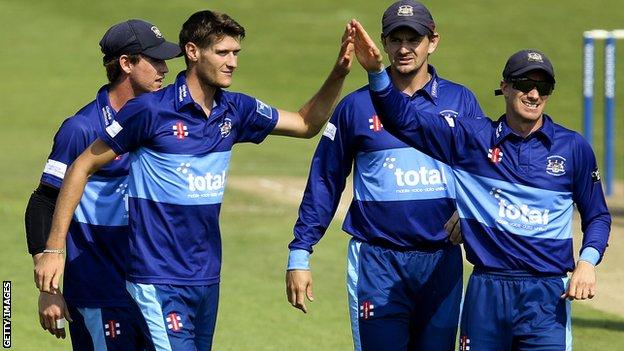 Gloucestershire coach Richard Dawson says improvement is needed if they want to progress in one-day cricket in 2014.

The county went into this year's final YB40 group game against Somerset level on points with second-placed Glamorgan, but defeat on Sunday meant they missed out on a semi-final place.

And Dawson told BBC Gloucestershire: "Our effort was there but it's just the little things we need to improve on.

"We need to turn up next year and prove we can win."

Gloucestershire's 12-run defeat by their local rivals meant they finished fourth in Group C with seven wins from 12 games.

"We need to compete with the likes of Middlesex, Somerset and Glamorgan if we're getting pulled out in their tables.

"There's things in our control that we can do better on; how many extras we bowl, we put a couple of catches down.

"But we are getting closer to the big lads now, and that's what we're asking for."

This is the last season of the 40-over one-day competition, which is being replaced by a 50-over tournament next year.

After being knocked out of the FLt20 in the group stage, Gloucestershire will now focus their attention on their remaining Division Two matches.

The Bristol-based side are currently fourth in the standings, with four matches to go, and are a point behind Essex - who they meet this week.

When asked if his side were in with a chance of promotion, Dawson replied: "Who knows? We've got to pick up our own points but if other teams do a job elsewhere then you never know if you're still in with a shout."