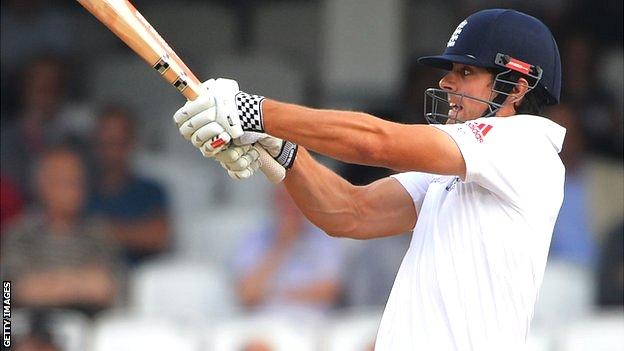 England captain Alastair Cook and James Anderson, Ian Bell, Stuart Broad and Graeme Swann are being rested for the one-day series against Australia.

The quintet are being given a break after helping England win the Ashes this summer, with the return series against Australia starting in November.

Batsman Eoin Morgan takes over as captain from Cook.

England play two Twenty20s against Australia on 29 and 31 August before travelling to Ireland to play an ODI on 3 September.

Batsmen Kevin Pietersen, Jonathan Trott and Joe Root will miss the trip to Ireland but will return for the five-match ODI series against Australia, which starts on 6 September.

"Following a very intense period of cricket this summer we have decided to rest a number of senior players which will allow them to recover from a heavy workload over the last three months and to prepare for the tour of Australia, which begins in eight weeks," said England national selector Geoff Miller.

"This creates an excellent opportunity for players who have impressed in county cricket and for England Lions recently to test themselves at international level as we continue to build a squad ahead of the ICC Cricket World Cup, which is less than 18 months away."

Uncapped Yorkshire batsman Gary Ballance, Nottinghamshire batsman James Taylor and Hampshire spinner Danny Briggs will drop out of the squad after the game against Ireland to make way for Pietersen, Trott and Root.

Rankin quit playing for Ireland in 2012 in order to try his luck with England, while stand-in captain Morgan followed the same path in 2008.

Australia have included only seven of their Ashes squad in their 18-man set-up for the ODIs against England.

Former England captain Michael Vaughan believes that the number of players being rested should mean fans who have bought tickets get recompensed.

Vaughan tweeted: "I would have only rested Captain Cook. Plenty of time to rest from Sept 16th-Nov 21st? Can't sell tickets then rest 5 star names.

"No problems resting players but I think supporters who have paid good money to watch the best should get a small refund."