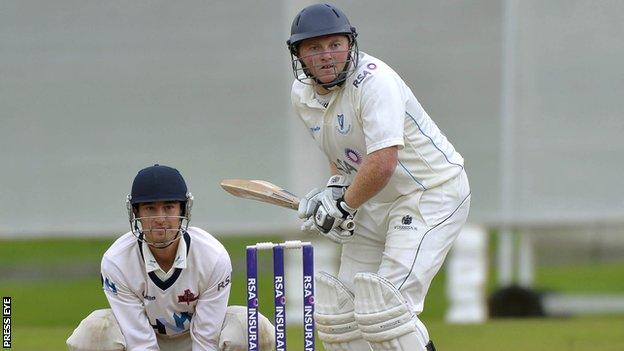 Andrew Poynter hit 113 as Leinster Lightning hung on for a draw against the Northern Knights on the final day of their Inter-Provincial game.

James Cameron-Dow's five wickets looked to have secured a Knights win after Leinster were reduced to 163 for 7 after following-on 276 runs in arrears.

Poynter however had other ideas - sharing an 8th wicket stand of 104 with teenager Tyrone Kane.

Poynter's dismissal - from the first ball bowled by Lee Nelson - came with Leinster Ligntning still nine runs behind, but Kane remained obdurate, finishing on an unbeaten 49 with Max Sorensen not out on 36.

Sorensen batting positively to first erase the deficit, and then add to it as the Northern Knights gradually ran out of time to gain the win their play probably warranted over the three days.

The Northern Knights looked in control after they declared on 501-4 on day two with Nick Larkin having struck a double century.

At the start of day three, Ben Ackland missed out on a century as he struck 87 as Leinster finished on 225 all-out.

Ackland scored a breezy 31 in Leinster's second innings while John Anderson also took a forthright approach, striking 10 boundaries in his 60 from 71 balls.

Spinner Cameron-Dow (5-124) was surely impressiing the watching Ireland coach Phil Simmons, and when he removed Richardson and Mooney with successive balls, he must have felt the game was won.

However the depth of the Lightning batting some became evident as they preserved their unbeaten run in the Championship, being presented with their trophy at the conclusion of the game.

They can make it a treble with a win in the final game of the RSA Series, when they play NW Warriors at Strabane on 21 September.