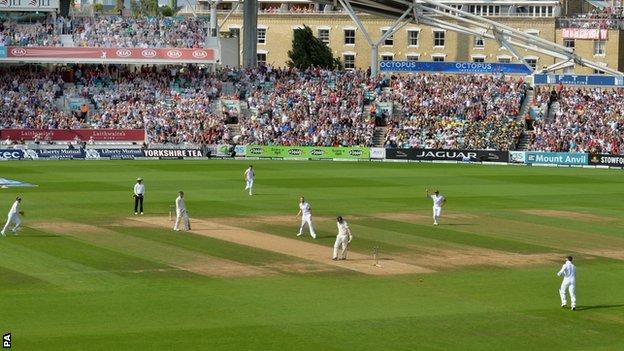 The England team have apologised for their "inappropriate" behaviour following reports some players urinated on the pitch during late-night celebrations following the final Ashes Test at The Oval.

The Test finished as a draw as England completed a 3-0 series win.

"We got carried away amongst the euphoria of winning such a prestigious series and accept some of our behaviour was inappropriate," a statement read. "If that has caused any offence to anyone, we apologise."

They've done the right thing issuing an apology. It's not the kind of behaviour you expect from our cricketers, or any of our sports teams.

They've probably been sat on the pitch from 8 o'clock to 11 o'clock talking and singing, and doing general things you do when you've won a big series.

I guess they just felt the toilets were too far away. They probably felt they were doing no harm, but I'm glad they've apologised to Surrey as well because they would have been deeply hurt by the actions of the players.

Unfortunately, it will stay with the players for a while. People will start judging them by what they do off the pitch instead of the way they play on it, which has been to a good standard.

The statement continued: "The England cricket team would like to state that during our celebrations after winning the Ashes at no time was there any intention to disrespect Surrey CCC, the Oval or anyone else involved in the game we love.

"As a team we pride ourselves on respecting all things cricket including the opposition and the grounds we play at.

"We want to reassure people that it was a simple error of judgement more than anything else."

Writing in the Sun newspaper on Tuesday, England off-spinner Graeme Swann acknowledged there had been an incident.

"We did go out to the middle of the pitch, all the lads, drinking beers, singing a few songs and enjoying each other's company," he said.

"I think the call of nature might have come once or twice but it was nothing untoward. It was midnight, a private celebration in the middle of the pitch and the ground was dark."

The allegations arose following eyewitness accounts from Australian journalists, who were still in the ground while England celebrated their series victory.

England's Matt Prior tweeted a picture of celebrations

Asked if the team were embarrassed by the headlines that appeared in the newspapers following the Oval incident, England Twenty20 captain Stuart Broad told media : "I haven't seen them to be honest."

He added: "The whole team felt like an apology was a good way to go and see that as the end of the matter.

"Now it's up to this England team to focus on winning this game of cricket tomorrow.

"I think as cricketers you have skills of having to deal with different issues from time to time but the most important one is making sure you get down hit the ball out the ground tomorrow and get some wickets."

Broad also welcomed an apology from Darren Lehmann after the Australia coach claimed the England bowler had cheated during the first Ashes Test.

Broad chose not to walk during the second innings despite admitting later he had edged a ball from Ashton Agar to slip via Brad Haddin's gloves.

Lehmann was highly critical of Broad during an Australian radio interview but later conceded he had been out or order.

Asked if Broad would face some extra banter when the T20 series gets under way on Thursday, Australia's T20 captain George Bailey said: "I'm sure they'll always be a few comments to Stuart Broad.

"He's Australia's number one poster boy at the moment, isn't he?

"But we have enough worries trying to play some good cricket ourselves without worrying about how England celebrate their wins."