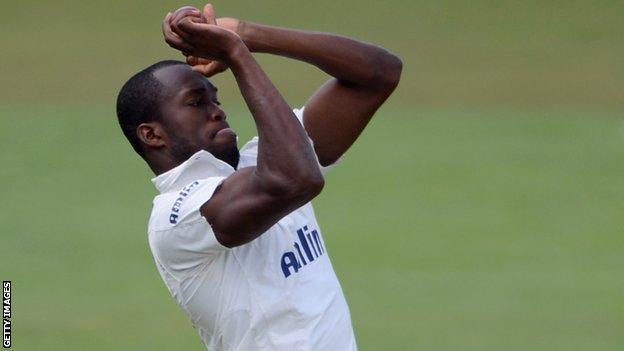 Warwickshire have signed Essex fast bowler Maurice Chambers on loan for the remainder of the 2013 season.

Chris Woakes, back from making his England Test debut, and Rikki Clarke (ankle) have been forced to pull out of the current County Championship game against Sussex, starting on Wednesday.

And Chambers, 25, has been signed in time to make an immediate debut.

"Maurice has pace, control and is a good athlete," said Warwickshire director of cricket Dougie Brown.

"Chris Woakes and Rikki Clarke will both unfortunately miss this match against Sussex due to injury, so we're very grateful to Essex for allowing Maurice to join for the remainder of the season."

Chambers is the second fast bowler signed on loan by the county in a week following Richard Jones' arrival from Worcestershire.

Jones was already out injured, forcing him to miss the chance of a Bears debut, having strained a chest muscle.

Both Woakes (quad injury) and Clarke hope to be fit for next week's Championship match against Notts at Trent Bridge.

Jamaica-born Chambers, who made his Essex debut in 2005, has taken 114 wickets in 46 first-class matches.