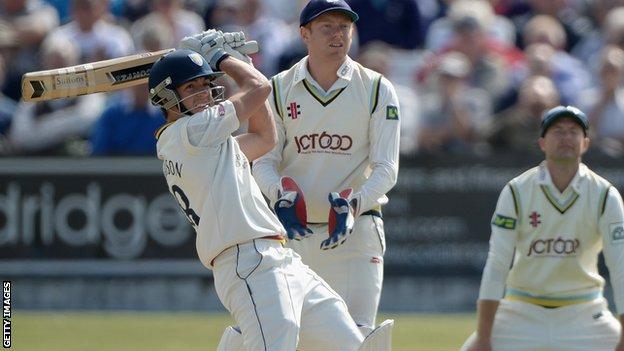 Michael Richardson hit his maiden first-class century at Scarborough as Durham piled up their highest Championship score against Yorkshire.

Richardson followed the lead of first-day centurions Mark Stoneman and Ben Stokes with an innings of 102.

Ryan Sidebottom took 4-85, but a six took Richardson to his hundred before they were all out for 573.

Leaders Yorkshire replied with 182-3 at the close, with New Zealander Kane Williamson unbeaten on 76.

After a tough opening day which saw Durham reach 406-6, Yorkshire were hoping to make short work of the tail.

Sidebottom soon had Paul Collingwood lbw for 81, but Richardson took on the lead role to push the score beyond 500 as he and Jamie Harrison (35) shared a ninth-wicket stand of 84.

The 26-year-old struck two sixes and 11 fours in his 144-ball innings and he was last man to go when he holed out to Williamson's off-spin.

Yorkshire opener Adam Lyth soon fell to a brilliant reaction catch at fourth slip by Ben Stokes, but although they also lost Phil Jaques (36) and skipper Andrew Gale, Williamson and England's Jonny Bairstow (42no) prevented further damage before stumps as they shared an unbroken stand of 75.

"It was a great day for Durham. 573 representing their highest score against Yorkshire. The innings included three centuries as Michael Richardson just got over the line with his last partner at the crease.

"Yorkshire's first target now is to score 424 to avoid the follow-on.

"But on a batting friendly wicket will either side be able to take the 20 wickets necessary to win?"