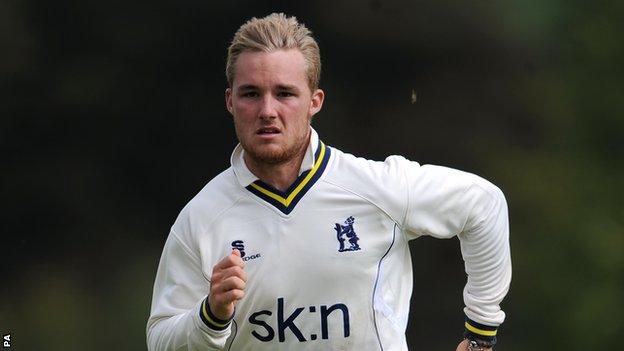 They lost their first two wickets without scoring and slumped to 47-4 in response to Sussex's 311 all out.

Earlier, loan signing Maurice Chambers mopped up the Sussex tail to finish with 5-68 on his Warwickshire debut.

Chambers took the final two wickets of Will Beer and Steve Magoffin to end an impressive first outing as a Warwickshire player, having arrived from Essex.

However, with both sides needing a win to maintain their title hopes, the Bears were immediately on the back foot when Magoffin saw off Varun Chopra and Ateeq Javid to leave them 0-2 for his 50th and 51st wickets of the season.

And after Will Porterfield was caught for a duck by wicketkeeper Ben Brown off Magoffin (3-54), things were looking bleak for the defending champions, only for Evans, who made centuries in previous home games against Nottinghamshire and Somerset, to hit 137 off 215 balls to give his side a good chance of establishing a first-innings lead.

The only blemish in Evans's innings was when he was dropped at mid-on off the bowling of Beer while on 45.