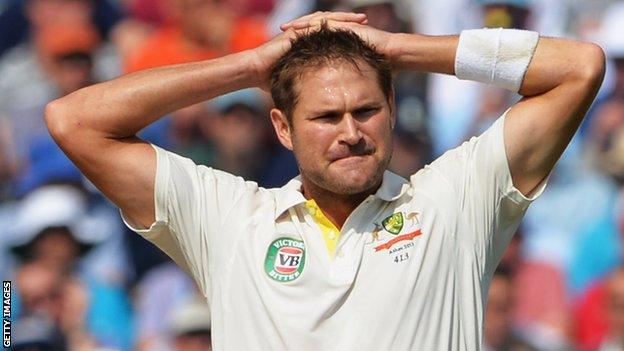 Ryan Harris has been ruled out for up to two months with a hamstring injury, giving Australia a scare ahead of this winter's Ashes series.

Harris, 33, was the tourists' man of the series this summer after taking 24 wickets in four Tests against England, including nine at Old Trafford.

It was the first time the seamer had played four consecutive Test matches in a career permeated by injury problems.

The first Test of the winter Ashes begins on 21 November in Brisbane.

The pace bowler also struggled for fitness ahead of this summer's Ashes series, which England would win 3-0.

Harris was ruled out of action for six to eight weeks with an Achilles injury in March, and was left out of the opening Test at Trent Bridge, which England won by 14 runs.

He returned for the second match at Lord's and impressed for the rest of the series, taking his Test career wicket haul to 71 in just 16 matches.

However, he was forced off the field during the fifth Test at the Oval after injuring his right hamstring and was unable to return to bowl.

In a statement, Cricket Australia said: "He was assessed after arriving back in Australia and is expected to be unavailable to play for the next six to eight weeks."

The former Surrey, Sussex and Yorkshire player has a history of injuries and missed the 2012 winter tour to South Africa after undergoing shoulder surgery.

In July 2010 he was forced to fly home from the Ashes to undergo corrective knee surgery, while he also missed the one-day series with England in December the same year after breaking his ankle.

A year earlier he had two other knee operations.