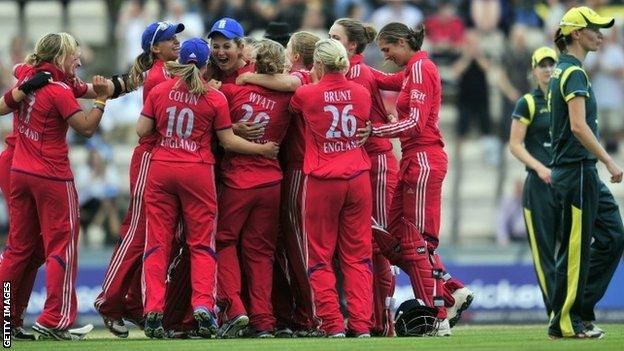 Lydia Greenway hit an unbeaten 80 from 64 balls to secure England's five wicket victory in the second Twenty20 international at Southampton.

The win gives England an unassailable 10-4 lead in the multi-format series, with one Twenty20 match at Durham on Saturday remaining.

"It's possibly one of my proudest moments in cricket," Edwards, 33, said.

Edwards was pleased to see her side return to form after a disappointing World Cup campaign over the winter that saw holders England knocked out in the Super Sixes.

"After a disappointing winter, to come back in the way we have done and beat the world champions on home soil as convincingly as we have done is really pleasing for us" she said.

England had trailed 4-2 in the series after drawing the one-off Test then losing the first one-day international at Lord's.

They took a 6-4 lead by beating Australia by five wickets in the third one-day international at Hove, then completed the series win with Thursday's victory at the Ageas Bowl.

"I'm incredibly proud of all of the team and the way that they have bounced back," Edwards continued.

Greenway felt her innings, the highest by an England player in women's Twenty20 internationals, was the best of her career so far.

"Yes. I think probably it is. As Charlotte said, the Ashes were there to be won and we didn't want to leave it until Durham," Greenway said.

Australia captain Jodie Fields was disappointed at losing the series, particularly after the men's side were beaten 3-0 by England in the Test series this summer.

"I'm pretty gutted to sit here and have lost the Ashes particularly after the men lost," she said.

"We saw it as our responsibility to work hard to bring it home and now both Australian teams will go home without the Ashes."