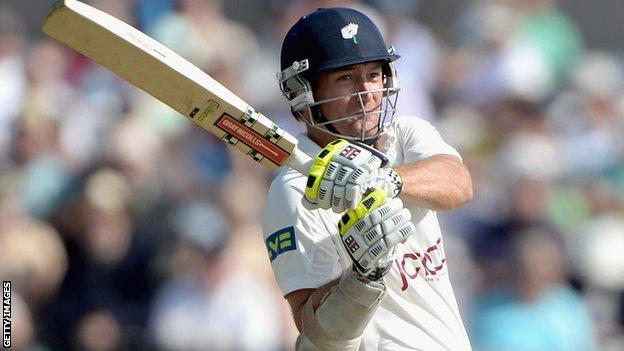 Phil Jaques and Kane Williamson shared an unbroken double-century stand to give Yorkshire hope of escaping with a draw against title rivals Durham.

Jaques struck two sixes and 23 fours in an unbeaten 151, with Williamson making 90 as they added 257.

Williamson earlier top-scored with 84 in Yorkshire's first innings, while England's Jonny Bairstow made 82.

Bairstow's contribution boosted his chances of a place in England's squad for the winter Ashes series, but he had a century there for the taking when a ball from Scott Borthwick took the leading edge as he shaped to play to leg and he was caught and bowled.

Williamson had fallen lbw to Ben Stokes and Gary Ballance, another tour candidate, was run out next ball as he attempted a second and failed to beat Chris Rushworth's throw.

When they batted again, Yorkshire soon lost Adam Lyth, lbw to Rushworth to 10 but Jaques, a former Australia Test opener, and Williamson, a leading member of the current New Zealand team, used their experience to halt the slide.

Jaques reached his second century of the summer with a boundary off Rushworth, and his only serious moment of alarm came when he gave a half-chance off Borthwick, but Mark Stoneman could not quite claim the catch as he dived across the pitch.

However, Yorkshire will need to bat well into the final day to make sure that Durham, who have a game in hand, do not return home with a vital victory.

"This was a day of contrasting fortunes. Durham dominated the morning session and took seven wickets for 63 runs as Yorkshire batted poorly.

"Paul Collingwood enforced the follow on with the Tykes 299 behind, but what a difference in the afternoon and evening as Phil Jacques produced a wonderful unbeaten 151 and was backed up by Kane Williamson with 90 not out.

"It was a stunning fightback and if the match ends in a draw on the final day, Yorkshire, as leaders, will be happier than second-placed Durham.