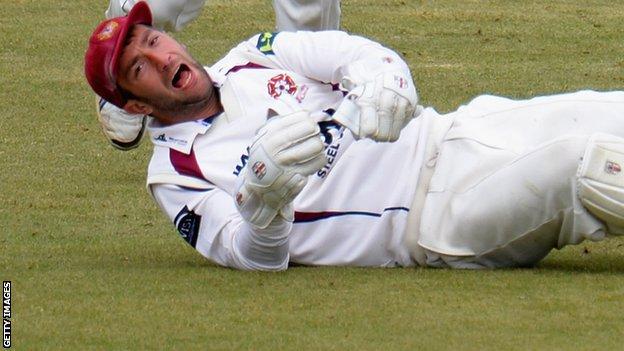 Northants stayed firmly on course for promotion as they beat Glamorgan by an innings and 25 runs, their first Championship victory since early June.

The Welsh club, who trailed by 212 on first innings, were all out for 187 to lose with four sessions remaining.

William Bragg (44) and Chris Cooke (42) offered some resistance before falling to Muhammad Azharullah (3-42).

Trent Copeland (3-41) was the other main wicket-taker and David Murphy claimed four catches behind the stumps.

The result ensured Northants, winners of the FLt20, remain as favourites to go up to Division One with Lancashire.

They began the match 31 points clear of third-placed Essex, who have a game in hand, and the win guaranteed they will still have clear water, irrespective of the result of the Chelmsford side's away fixture against Gloucestershire.

Copeland made the initial breakthrough by removing Gareth Rees and Murray Goodwin, but it was a burst of five wickets in 11 overs after the lunch interval that sent Glamorgan's innings into terminal decline.

Graeme Wagg hit a six and four boundaries in an unbeaten 34, but Andrew Hall (2-36) brought the game to an end when he found the edge of Michael Reed's bat and Copeland took the catch at slip.

"Northamptonshire have their fifth Championship win - their first since June - and perhaps the most important psychologically.

"They outplayed an under-strength Glamorgan side in all three departments and once given a sniff with Bragg's dismissal, the home side's bowlers ruthlessly blew away the rest of the batting line-up.

"Once again, the bowlers shared the wickets around, with Azharullah the marginal pick with three wickets in the afternoon session."