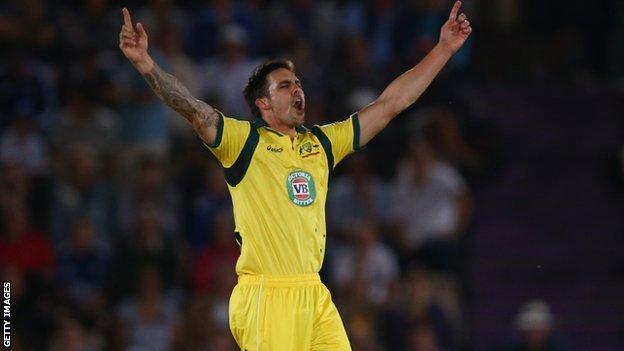 Australia fast bowler Mitchell Johnson wants England's batsmen to "fear" him as he aims to reclaim his Test place for this winter's Ashes.

Johnson, 31, is in the Twenty20 and one-day squads to face England, but was overlooked for the 3-0 Ashes defeat.

He is set to play in Saturday's Twenty20 game at Durham, with Australia 1-0 up in the two-match series.

"I'd love to get back playing Test match cricket and play in the next Ashes series," said Johnson.

"When I first started playing cricket one of the main reasons I wanted to play was to get out batsmen - and to be able to hopefully put a bit of fear into their eyes.

"That's why I want to play. At the moment I'm really enjoying myself."

Johnson took two wickets and hit 93mph on the speed gun in Thursday's 39-run win in the first Twenty20 international at the Rose Bowl.

The left-armer is regarded as a figure of fun among England fans for his wayward bowling in previous Ashes series.

The emergence of young bowlers such as James Pattinson and Mitchell Starc, plus a toe injury that kept him sidelined for most of last year, has seen him fall out of favour in the Test set-up.

But Johnson, who has taken 205 wickets in 51 Tests, believes he can still win his first Ashes series this winter.

He added: "I've felt like my bowling is exactly where I want it to be now. I'm bowling with good pace and when the conditions are right I can swing the ball. I can bowl that good short ball again."

One player in Johnson's sights this weekend - and in September's five one-day internationals - is England all-rounder Ravi Bopara, who admits their late collapse in this summer's Champions Trophy final against India at Edgbaston still plays on his mind.

Bopara and Eoin Morgan were at the crease with just 20 needed from the last 16 balls and six wickets remaining as England sought their first major 50-over international title.

However, both departed in consecutive balls with Bopara criticised for carelessly picking out square leg as England lost by five runs.

England play their first 50-over match since the Champions Trophy against Ireland on Tuesday, before embarking on the ODI series against Australia.

Bopara, 28, said: "It is not something that is easy to forget. When you come that close to winning a major competition and you have the opportunity in your hands but see it just go, it is not a nice feeling.