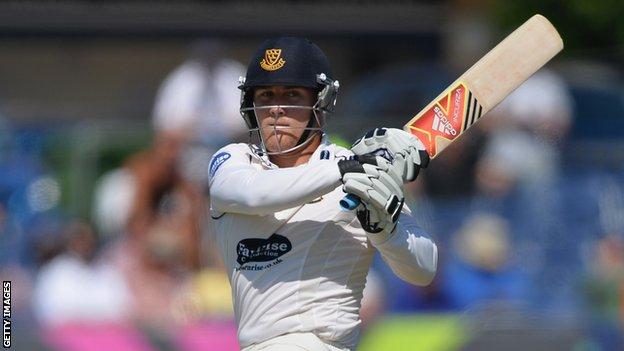 Warwickshire and Sussex's County Championship title hopes took a blow as they settled for a draw at Edgbaston.

The hosts were unable to claim the quick wickets they needed as Sussex moved from 148-3 to 394-9 declared.

Ed Joyce hit 68 and Rory Hamilton-Brown livened up proceedings with a lusty 75, while Jeetan Patel finished with 3-74 as Warwickshire used nine bowlers.

As the game drifted along after tea with no chance of a result the captains shook hands at 16:50 BST.

With Sussex starting the day just 65 runs ahead, the hosts' chances of forcing a victory slipped away as it took Recordo Gordon an hour to remove nightwatchman Will Beer lbw for 11.

Joyce and Hamilton-Brown then virtually made the game safe as they put on 106 for the fifth wicket before Joyce was trapped in front by Keith Barker.

Once Hamilton-Brown went, lbw to Patel, the lead had already stretched to 251 as Warwickshire gave most of the side a bowl including openers Varun Chopra and Ian Westwood, who claimed the wicket of Steve Magoffin before the game was brought to a close.

The result leaves Sussex 29 points behind leaders Yorkshire, while Warwickshire are now 46 points adrift with just three games to play.