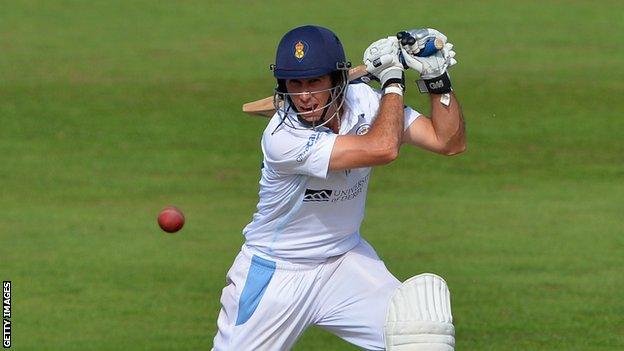 Surrey put themselves in a position to claim their first County Championship win of the season after an attritional third day against Derbyshire.

Captain Wayne Madsen scored 59 and a number of other batsmen got starts but wickets fell at regular intervals.

Tim Linley, Gareth Batty and Chris Tremlett each claimed two wickets with Tom Poynton (29no) and David Wainwright (22no) there at stumps.

After resuming on 13-0, Linley had Ben Slater caught by Zafar Ansari for 13 before bowling Paul Borrington for 38.

Gareth Batty then picked up the key scalp of Shivnarine Chanderpaul, trapping him in front for 14.

After Madsen fell lbw to Tremlett, Derbyshire lost four wickets for 26 before Poynton and Wainwright forged a mini recovery.

A win for Surrey would move them off the foot of the table above Derbyshire.

"A tense final day awaits as Derbyshire showed application to bat through the third day to hold a 161 run lead.

"The Surrey bowlers worked hard and bowled well but were held up by a fine innings from Wayne Madsen and late resistance from David Wainwright and Tom Poynton.

"At some point tomorrow Surrey will start a run chase for victory and cool, clam heads will be needed by both sides."