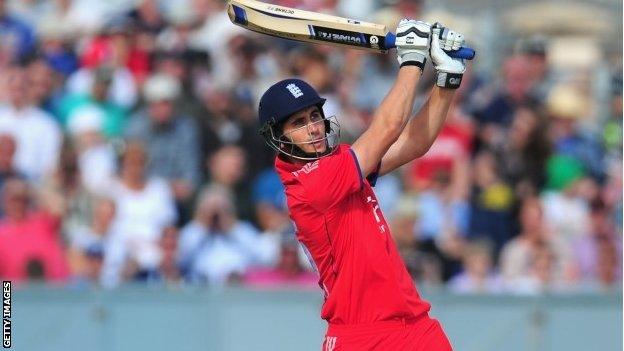 Alex Hales scored a blistering 94 as England beat Australia by 27 runs to draw their Twenty20 series 1-1.

Hales and his Nottinghamshire team-mate Michael Lumb (43) put on 111 for the first wicket to help propel England to 195-5, with Fawad Ahmed taking 3-25.

But Jade Dernbach took three wickets as the tourists collapsed from 111-3 to end well short on 168-9.

Dernbach finished with figures of 3-23 to back up his impressive return of 3-34 in the first match on Thursday, when Aaron Finch's record 156 catapulted Australia to a 39-run victory.

"He has shown his skill in Twenty20 cricket on two pretty good batting surfaces. The rest of our bowlers can look at that - something different skill-wise.

"His figures over the two games have been superb and hopefully that form can continue until the World Cup [in Bangladesh next year]."

England's openers made light of losing the toss to set the hosts on course for an imposing total.

Hales and Lumb, under pressure for their places from Hampshire's in-form Michael Carberry, peppered the boundary and found the gaps in the large Chester-le-Street outfield to keep the scoreboard moving apace.

After Lumb's dismissal, Luke Wright (30) and Eoin Morgan (20) ensured England remained on course for a big score, only for three wickets in the last seven balls to keep the hosts in range for Australia.

Hales, who scored 99 against West Indies last year, fell six short of that elusive century when he slapped James Faulkner to long-on.

Ahmed then removed Jos Buttler and Morgan in the last over of the innings, which yielded only eight runs.

England captain Stuart Broad dismissed Finch in Australia's second over and Morgan's direct hit ran out Shane Watson in the third to leave the tourists in difficulty on 15-2.

Warner countered with three sixes and five fours before slicing Dernbach to Hales at deep cover to initiate a dramatic slump.

Captain Bailey drew positives from the promising performance of Pakistan-born leg-spinner Ahmed in only his second international appearance.

"It was fantastic for him. We saw he has good control and good skills. He is someone who can have a lot of success."

England play a one-day international against Ireland in Dublin on Tuesday, while the Australians take on Scotland in Edinburgh.

The Ashes rivals will then contest a five-match one-day series, starting at Headingley on Friday.