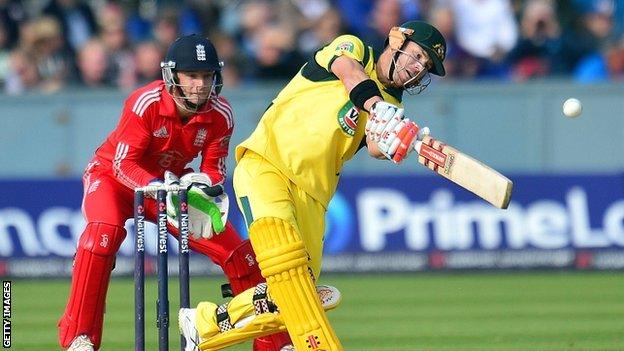 Australia batsman David Warner has been dropped for the one-day series against England because of a lack of runs.

Warner has made one half-century in his last 11 ODIs but scored a fluent 53 in the second Twenty20 match on Saturday.

The opener, 26, was suspended before the Ashes for punching England's Joe Root after a Champions Trophy match.

Australia play Scotland in an ODI in Edinburgh on Tuesday before the five-match series against England begins at Headingley on Friday.

Bowler Mitchell Starc will also be absent from Australia's ranks because he has injured his back and, like Warner, will fly home.

"David has been left out of the squad purely due to his recent lack of form in this format," said Australia coach Lehmann.

"David would acknowledge that unfortunately he hasn't scored the weight of runs that he would like recently in one-day cricket for his country.

"I spoke with David at length about what he needs to do and I've been impressed with his attitude since I've come into the Australian set-up."

Having been sent to Australia A's tour of South Africa during his suspension, Warner returned for the third Test at Old Trafford, where he was booed by the Manchester crowd. His top score in the series was a 71 in the fourth Test at Durham.

Left-armer Starc joins a growing list of injured Australia bowlers in the run-up to this winter's return Ashes series.

James Pattinson flew home with a back problem after playing in the first two Tests while Ryan Harris was this week ruled out for up to eight weeks with a hamstring injury.

Jackson Bird played only the fourth Test before suffering lower back problems and Pat Cummins is also expected to miss most of the winter.

While Australia are playing Scotland on Tuesday, England will be taking on Ireland in Dublin.