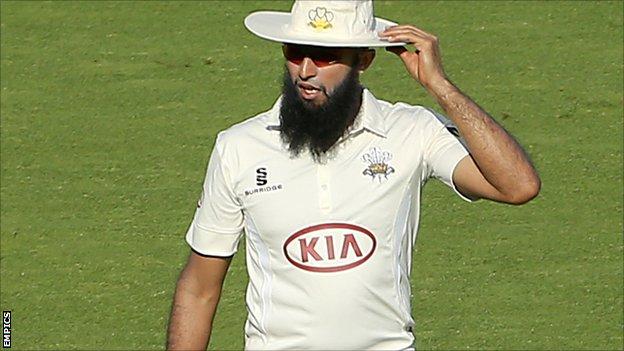 Set 217 in 73 overs, Surrey slipped to 4-2 before Amla revived their fortunes.

The South African was joined in battling stands of 84, 58 and 45 by Vikram Solanki, Zander de Bruyn and Steven Davies respectively.

The win, Surrey's first of the season, puts them two points ahead of Derbyshire at the base of Division One.

With 97 points, Surrey remain 15 adrift of seventh-placed Somerset, but with a game in hand.

Derbyshire began the final day 161 runs ahead at 231-7, and they added another 55 after a fine eighth-wicket stand between Tom Poynton and David Wainwright.

Surrey looked a long way off when Rory Burns was brilliantly caught by Wayne Madsen off Mark Footitt in the third over, and Arun Harinath was pouched for a duck by Shivnarine Chanderpaul at first slip off Matt Higginbottom in the next.

But Amla, Solanki, de Bruyn and Davies helped put Surrey in the ascendancy before Zafar Ansari and Gareth Batty knocked off the remaining runs to bring Surrey with four wickets and 6.2 overs in hand.

Derbyshire fought valiantly throughout the day in a bid to ensure their third win of the season, but Amla ultimately proved the difference between the sides

Having added a further 55 this morning to lead by 216, Derbyshire probably felt they had enough runs in the bank, and the early dismissals of Burns and Arinath meant they lunched in good heart.

However the crucial turning point came when Amla was dropped by Alex Hughes on 24; he went on to make 88 and although Derbyshire kept chipping away, they were left with just too much to do.

The game against Somerset at Taunton beginning on Tuesday effectively becomes a must-win for the Peakites; any other result will almost inevitably see them drop back to Division Two after just one season.