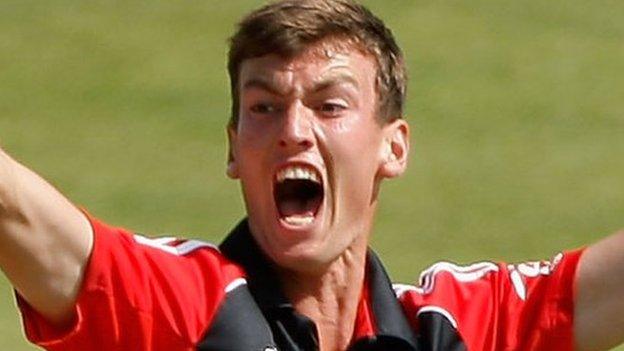 Essex fast bowler Reece Topley led the way with a career-best 6-29 as Worcestershire suffered a terrible first day at Chelmsford.

After winning the toss and opting to bat, the visitors were shot out for 102 by mid-afternoon.

Essex then recovered from the loss of an early wicket to reply with 199-4.

Greg Smith (94) and Jaik Mickelburgh (65) set things up with a second-wicket stand of 158, to create the prospect of a significant first innings lead.

Moeen Ali got rid of both batsmen late in the day, either side of a second wicket for Alan Richardson, who had earlier removed youngster Nick Browne - in the Essex team because Gautam Gambhir has returned to India for family reasons - for a sixth-ball duck.

But Essex have already built up a massive advantage in this private battle of the two Division Two promotion outsiders.

The efforts of young left-armer Topley, son of former Essex all-rounder Don, took his haul of first-class wickets for the season to 38 as he bettered his career-best for the first time since his debut more than two years ago.