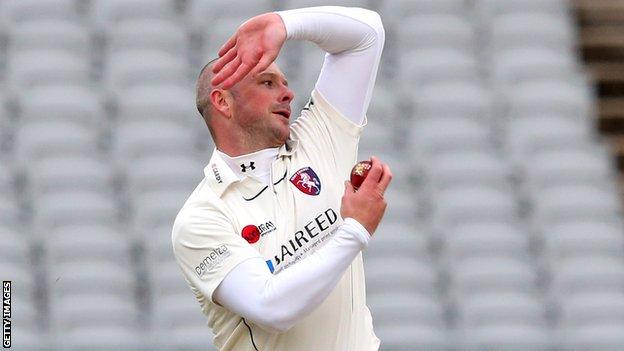 Kent struggled to 102-5 after Darren Stevens helped skittle Glamorgan for just 158 on day one in Cardiff.

Stevens (4-34) claimed three victims to reduce Glamorgan from 31-0 to 52-3 before Ben Wright (55) provided the only notable contribution.

Daniel Bell-Drummond (41no) and Stevens (29) calmly rebuilt before the latter fell late with score on 94.

The game turned when Stevens struck three times in his opening five overs, bowling Gareth Rees and having Will Bragg and Chris Cooke caught behind and at slip respectively.

When Charlie Shreck bagged the crucial wicket of Murray Goodwin, who drove to short extra cover, they quickly crumbled and the innings ended when Stevens trapped Mike Reed lbw.

"What an absorbing day's cricket as 15 wickets fell on what is as good a pitch as any.

"Kent's bowlers had to work hard to find the right spot to induce one or two false shots and Darren Stevens picked up four wickets with a good, nagging line.

"Daniel Bell-Drummond then batted with maturity to hold the Kent innings together."