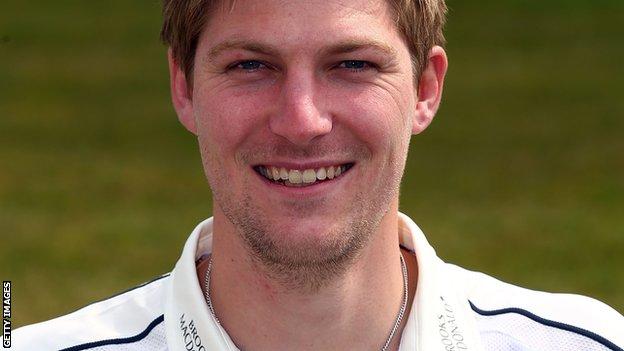 Middlesex's Ollie Rayner took eight wickets and was involved in the other two to leave relegation-threatened Surrey in deep trouble at The Oval.

Middlesex were all out for 294 as Neil Dexter ran out of partners on 90 not out, but Rayner wrecked Surrey's reply.

The off-spinner produced a career-best 8-46 as well as taking two slip catches as the hosts were all out for 145.

Surrey will now need Keedy to make short work of Middlesex's lower order on the third day if they are to have any chance of a successful run-chase to improve their chances avoiding relegation.

Rayner took full advantage of the conditions as he did his level best to put his side in position to win the game and keep their title hopes alive.

He caught Arun Harinath and Hashim Amla in the slips off James Harris and Ravi Patel respectively, but it was merely a prelude to what was to follow.

Rayner took his first five-wicket haul in five years in last week's defeat by Derbyshire and, although Rory Burns made 38, the confidence gained from that was evident as he dismantled the rest of the Surrey batting.

"Middlesex took the game by the scruff of the neck after lunch as Ollie Rayner claimed his career best.

"None of the Surrey batsmen could get to grips with the bounce and turn Rayner extracted.

"Gary Keedy then took all five wickets in the evening session, but Surrey have a hell of a fight on their hands tomorrow.

"An extraordinary day of highs and lows for both counties, but Middlesex have gained the clear, and potentially unassailable, advantage.

"Surrey would have been delighted with the morning session when they wrapped up the visitors' final three first-innings wickets for 14 further runs and reached lunch only one down.

"But the afternoon session will be one that Ollie Rayner will never forget as he claimed his best bowling figures in an innings and he claimed all of his eight wickets in the afternoon."