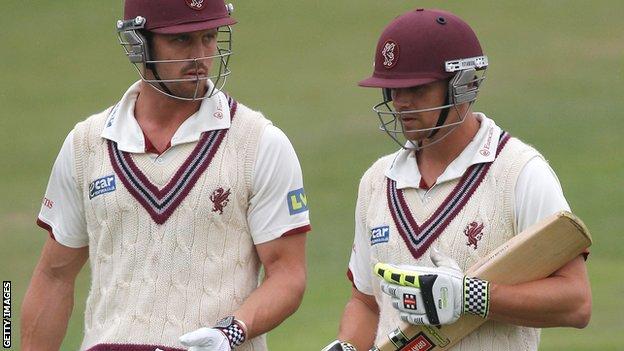 Resuming on 220-5, the visitors were all out for 298, as overnight half-centurions Richard Johnson (68) and Tom Poynton (57) proved unable to push on.

Despite Somerset enjoying such a good day, they are still underdogs in this game thanks to their paltry first-innings total of 103.

Bottom-placed Derbyshire went into this round of matches trailing Somerset - who sit just outside the Division One relegation zone - by 17 points.

But the East Midlands club denying their hosts any batting points with an exceptional bowling performance.

They resumed on day two at Taunton with a 117-run lead, but Poynton fell to Thomas in the day's second over.

Piyush Chawla, on his home debut, added the scalp of Johnson to finish with 5-111, while Craig Meschede (2-30) got rid of last man Mark Footitt, leaving Tim Groenewald unbeaten on 36, but the last pair did add a valuable 42.

And Hildreth hit a six and eight fours in nearly two hours at the crease, enjoying a century stand for the third wicket with Compton.

"Derbyshire will have high hopes of recording a third win in four matches.

"But it was a far more resilient effort second time around from Somerset, who made the visitors work hard for their wickets.

"Marcus Trescothick, James Hildreth and Nick Compton all made sizeable contributions, but two wickets in the last half an hour have given Derbyshire every chance of securing a victory that will keep their Division One hopes alive."