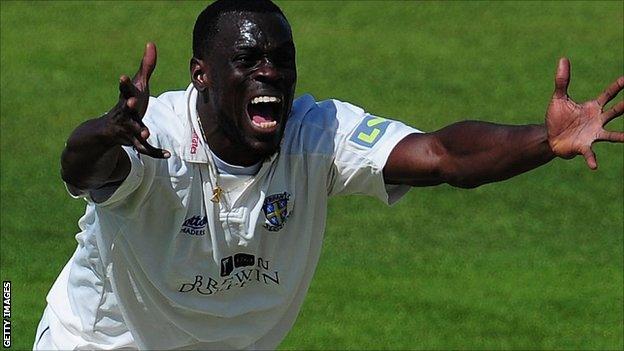 Hampshire have completed the signing of fast bowler Ruel Brathwaite.

The Barbados-born paceman took 39 wickets in 11 matches for Durham but found opportunities limited and was released by the county.

"I'm absolutely delighted to sign for Hampshire and excited by the prospect of evolving my game under Giles White [Hampshire manager]," said Brathwaite.

Brathwaite, who made his Hampshire debut in the County Championship match against Northants, added: "It was a good time [at Durham], but it just wasn't meant to be.

"It is very tough being a fast bowler in the north east. There are so many fast bowlers and it's hard to get in and get a chance.

"But I enjoyed my time at Durham and learnt a lot and hopefully I can bring that knowledge to Hampshire and take my career forward."

He will be eligible to play the remainder of this season's County Championship matches but not in the YB40 competition for the Royals. In 2014, he will be available for all formats.