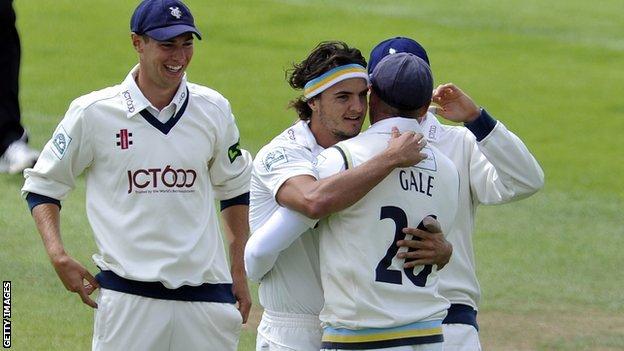 Former Yorkshire County Championship-winning captain David Byas believes the county have a side capable of winning the title in their 150th year.

Yorkshire, who were promoted back to the top division last year, currently trail leaders Durham by 14.5 points with three games to play.

Byas captained the county to their last title triumph in 2001.

"I think they'll win it, but it might go down to the final game," the 50-year-old told BBC Sport.

Jason Gillespie's side travel to fourth-placed Sussex on Wednesday, looking to bounce back after defeat by Durham in their last game and Byas has backed Yorkshire's batting line-up to come good again.

"They have a very strong order and somebody has put their hand up pretty much every game and contributed with a big score.

"To win the County Championship is a magnificent achievement, but for Yorkshire to have it in their 150th year would be tremendous.

"It is the ultimate achievement for any county side."

Byas left Yorkshire after leading them to their first title in 33 years and spent two seasons with arch-rivals Lancashire, before returning to Headingley as coach from 2004 to 2006.

The former batsman, who scored more than 23,000 runs in during his career, has fond memories of the title win.

"I was lucky enough to be involved with a very good club and have a couple of really good seasons," he said.

"It was great to get the opportunities I had as a player and a captain. It's something I'll cherish and remember for many years to come."