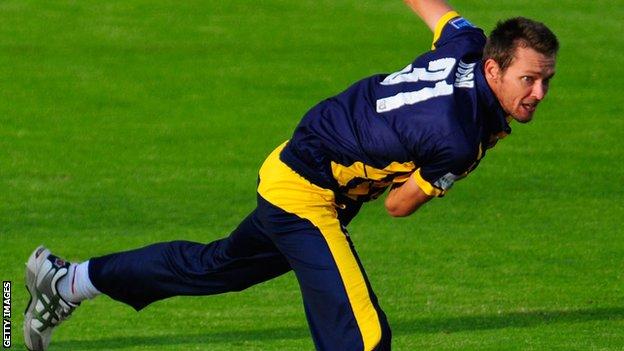 Glamorgan's in-form Australian seamer Michael Hogan says he wants to end his career at the county.

Hogan, 32, is the leading wicket-taker in the whole LV County Championship having taken 61 first-class wickets.

The Western Australian has also guided the county to the semi-finals of the YB40 competition with 30 wickets.

"I'm actually speaking to the club about extending [my contract] and staying here for the rest of my career," he said.

Hogan, who completed figures of six for 65 against Kent on Wednesday, is looking at a two-year extension to his contract which he says would take him up towards retirement age.

Glamorgan fans had been concerned at the depth of their seam bowling pool after England Lion James Harris left for Middlesex at the end of the 2012 season.

But Hogan has more than filled the void. He is Australian-born but has given up that national qualification to take up a British passport.

Despite his own success, Hogan believes Glamorgan have under-achieved in the LV County Championship where they currently lie sixth in Division Two.

"Maybe there is a hint of under-achievement if I'm going to be honest," said Hogan on Glamorgan's four-day campaign.

Speaking to the Sport Wales programme, broadcast on Thursday, he added: "Some guys have really performed - Murray [Goodwin] and Jim Allenby have both had 1,000 run seasons and myself with 50-plus wickets.

"I think that is almost a backbone for a push for promotion, but as a collective group in certain situations we haven't got the job done."

Even though he is currently the leading wicket-taker in the country he believes there is more to come from him in 2014.

"[I'm] never satisfied. I think there is still a bit of work to do personally. It took a while for me to get used to the Duke ball [different make]. Hopefully next season I can come in and be ready for the start.

"We played some good cricket aside of the four-day competition and I'm not sure anyone expected us to reach the [YB40] semi-finals.

"I don't think we are flashy cricketers but we have all worked hard and I think it is probably a reward for what we have done."

Glamorgan take on Hampshire in the YB40 last four at the Ageas Bowl in Southampton on Saturday.

Sport Wales is on BBC Two Wales at 19:00 BST on Thursday, 5 September and afterwards on iPlayer