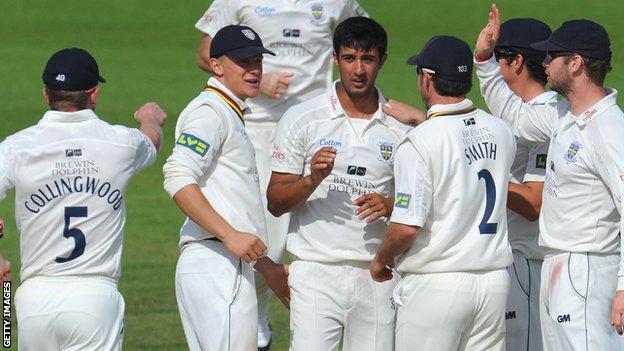 Durham moved to the top of the County Championship with a resounding 285-run win over Sussex at Chester-le-Street.

It left an under-strength Sussex side to face a remote target of 403.

The win put Durham 14.5 points clear of second-placed Yorkshire at the top of Division One, with both sides having three matches still to play.

Durham had looked strong favourites at the start of the day, resuming on 212-6 with a lead of 345, but with heavy rain forecast throughout Friday a quick declaration was likely to be their best chance of victory.

Mustard, Arshad (34) and Claydon (12) all contributed as Durham's lead stretched past 400 and, having bowled Sussex out for only 112 in the first innings, Collingwood opted to put the visitors in to bat again.

Scott Borthwick caught Luke Wells off the bowling of Onions (3-38) just three balls into the innings, before Nash and Michael Yardy (25) shared 48 to frustrate the hosts.

But Claydon (3-31) trapped both Nash and Yardy in front and then had Rory Hamilton-Brown caught behind to shift the momentum firmly back in Durham's favour.

Arshad (3-18) tore through the Sussex middle order and, although Steve Magoffin offered some resistance with 20 off 16 balls, Onions had Hatchett caught by Borthwick to secure Durham's third win in a row.

"That was a fantastic victory, particularly in the manner we did it. We put Sussex under a lot of pressure, we ground them down with the bat and really wore them out in the end.

"It is difficult to say if it is now a two-horse race, I don't really look at league tables. We just want to keep going about our business like we have been.

"The closer you get to the prize the more emotion comes into it and once emotion gets involved with sport it can be dangerous, so I try to distance myself from it."